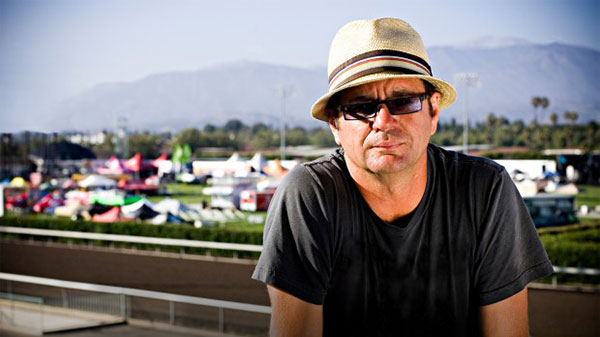 Kevin Lyman knows a thing or two about the organization and production of tours and festivals. He is, after all, the founder of punk institution, Warped Tour, which attracts more than 700,000 people annually and is the longest-running festival tour in North America. Additionally, Lyman co-founded Mayhem Festival, a touring metal festival launched in 2008. As such, Lyman is uniquely positioned to compare and contrast metal tours with punk tours. Unfortunately, he doesn't appear particularly hopeful when it comes to metal.

In a new interview with Detroit Free Press, Lyman was brutally honest about this year's Mayhem Festival and its future, or lack thereof.

"It was the best available for what we had to work with," Lyman said about this year's bill, which includes Slayer, King Diamond, and The Devil Wears Prada. "We had pressure to keep the package at a certain price and make that work, and we had pressure on headliner expenses."

"I mean, Mayhem, it's at risk of going away at any given moment," Lyman eventually admitted. Here's his explanation for Mayhem's potential woes and the tentative future of big metal tours:


"The bands at the top all demand a certain level of fee to be on tour. Unlike punk rock, metal never knows how to take a step back to move the whole scene forward. That's how punk rock was. That's how we nurtured punk rock. Bad Religion would take a little less than they could on their own to bring the whole scene forward, so we could make sure we had a good (touring) package around them. Metal doesn't seem to have that concern, never has, never has since I was working in the clubs in the '80s. It's always about a me, me, me thing... What happened was metal chased girls away because what happened was metal aged. Metal got gray, bald and fat. And metal was about danger. When you went to a metal show, it was dudes onstage; there was some danger in it."

Of course Lyman still thinks this year's Mayhem concerts will be a success. "We'll give the best possible show to kids that come out," he saiys. "And there will be a lot of people there. We'll probably do 8,000 or 9,000 people a show."

He's 100% right, and the bitter washed up hasbeens of metal are to blame. Lambgoaters and myself included tend hate on every new young band into oblivion. I'm not saying they are all great bands but it's rare that they are given a chance by older metal fans.

He's 100% right, and the bitter washed up hasbeens of metal are to blame. Lambgoaters and myself included tend hate on every new young band into oblivion. I'm not saying they are all great bands but it's rare that they are given a chance by older metal fans.

He should have spent that headliner money on The Beets instead of Slayer, HONK HONK

Market is too saturated. There should be a standard for bands. Too much shit. Also metal bands are greedy for members who usually are white middle class have their gear bought for them.

Dont worry about anyone chasing girls away. not one of them had ever paid for an admission ticket to see a nasty pedo like you. Punk music sucks and most everyone that out grows it plays metal. But go on and promote bands that sing about teen angst while youre still young.... wait. Youre way past half dead. Your opinion is not real. VOID!

"We'll give the best possible show to kids that come out," he saiys. Will there be fisher price and playskool toys? I love kids too!

Fat old grey c*nts getting butthurt about the truth ITT

well he's not wrong. hope Mayhem lasts as long as Warped Tour...unless Ozzfest comes back or Sounds Of The Underground

What does he expect when they book Slayer? Girls? The metal scene for chicks has been non-existent since the Emo flash (which, other than the music, wasn't bad) in 2001. The Warp Tour still brings MANY babes, but they are not in the "scene". You won't see the same babes in the clubs when these bands come around. Just fake, fake, fake.

metal bands got gray, fat, and chased away girls. And warp tour bands are still gayer than eating Turkish delight with the witch queen of Narnia.