Wed, February 12, 2020 5:59 PM PT23,298 views
Emmure will drop a new single next month, with plans to release a new album (seemingly titled Hindsight) later this year. However, don't expect the lyrics this time around to parallel those of previous Emmure albums. Speaking via Twitter (see below) earlier this week, Emmure vocalist and metalcore agitator Frankie Palmeri now claims to "emotionally and spiritually reject" the vast majority of lyrics he's penned over the years:
"Hanging out with someone who only listens to metalcore made [me] realize why regular people with healthy neuroplasticity don't fuck with that genre of music and gravitate towards pop/rap. Talk about a fucking unnecessary onslaught of bullshit emotions. "Trust me when I say; I emotionally and spiritually reject almost every lyric I've ever written. It all stems from material pain, a fragile ego, an inability to cope. It's unfortunate anyone has ever identitifed with any of what I've said in my music. A lot [of] people are/were hurting." 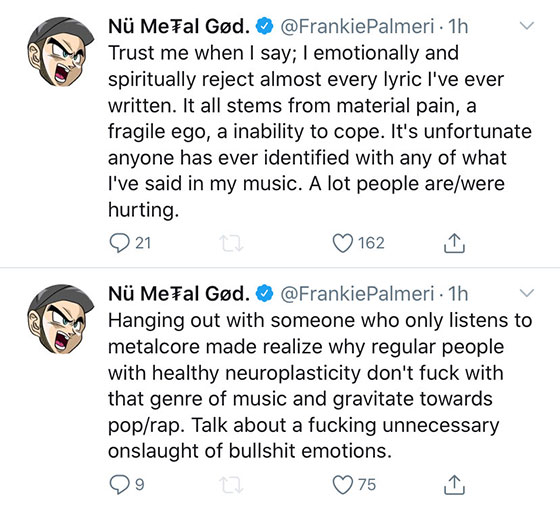