Thu, November 7, 2019 8:48 AM PT16,753 views
It's no secret that earning a respectable living can be rather difficult for metal and hardcore bands not named Metallica, Slipknot, Lamb of God, et al. As such, many artists are forced to explore alternative methods for generating income when tour revenue, merch sales, and recording royalties just aren't enough to make ends meet. Some approaches are more direct than others, and few are more streamlined than a new sales pitch from Emmure vocalist and mastermind Frankie Palmeri, who is reaching out to fans via social media to ask for $100 donations in the name of the "Emmure cult." This week, Palmeri began sending nearly identical direct messages to followers of both his Twitter and Instagram accounts. After messaging select individuals with "hey there got a second?," Palmeri follows up to those who respond with the following proposal (see screen capture below):
"Thanks! So I'm reaching out to people (hopefully true fans) asking if they would be able to make a $100 donation to the Emmure cult. But it's not just a $100 donation via PayPal, it also signs you up to our exclusive email list and gives donation members access to free VIP and guest list spots at future shows plus exclusive merch items both at our shows and online. The current industry climate is pretty rough, so we want to give the fans a chance to be invested in what we do while supporting us. These spots are limited, so let me know if you're interested and I'll supply the necessary info."
Among those who reached out to Lambgoat on the matter, a few expressed concern that Palmeri is requesting funds from his own personal accounts rather than the band's, and one was wary of "getting scammed" because "we've seen shit like this before with Jonny Craig." Assuming his intentions are honorable, it's difficult to fault Palmeri for trying to keep Emmure afloat. Of course, any such endeavor is likely to be met with a fair amount of skepticism and/or backlash. To Palmeri, that's obviously a risk worth taking; we wish him well. 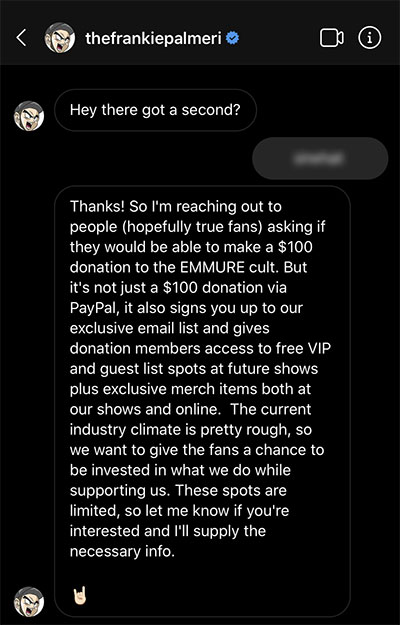 UPDATE: Palmeri has now taken to Twitter to announce that to avoid any "negativity" associated with the "long term fan club subscription," he has refunded all donations. You can check out his remarks below. 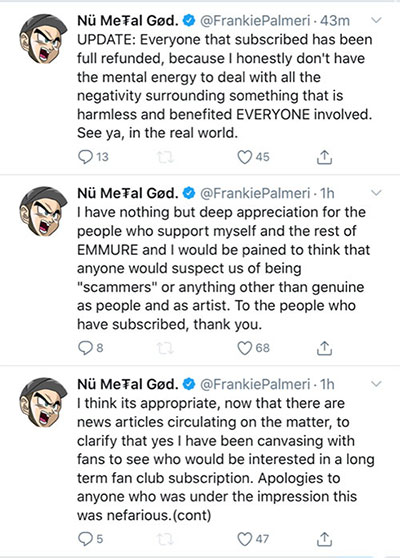