Power Trip and Southern Lord at odds over record deal

Although holiday season is squarely upon us, the relationship between Texan thrash metal unit Power Trip and their record label Southern Lord appears to be anything but festive. In 2012, when Power Trip were relatively unknown on a national scale, the two entities signed a three-album deal. Since then, Power Trip have grown into one of the metal scene's largest "underground" bands. With the third album of the aforementioned deal now in the works, Power Trip aren't happy with the arrangement and are reportedly doing whatever they can to wrest control from Southern Lord. Our sources indicate that Power Trip have hired a lawyer and he/she has been working diligently to find a legal mechanism through which to dissolve their record contract. Thus far, legal efforts seem to have been fruitless, prompting the current owner of Southern California record label Dark Operative to lash out via social media. Power Trip released an EP with Dark Operative in 2018 (in addition to a recent picture flexi) and label founder Brent Eyestone (who also launched Magic Bullet Records) seems to be doing his friends' dirty work in the realm of public opinion. During the past several weeks, Dark Operative has issued a handful of insults aimed directly at Southern Lord and its owner, Greg Anderson (also of Sunn O))) and Goatsnake fame). According to Eyestone, whatever animus existed between relevant parties was exacerbated when Southern Lord "falsely" filed a copyright claim with Spotify for the Power Trip track, "Hornet's Nest." (See Dark Operative's rebuke regarding this piece below.) Three weeks ago, amid Power Trip's North American tour with High On Fire, Dark Operative tweeted the following to Southern Lord:

We're 23 shows into the Power Trip / High on Fire North American tour. Do you plan on mentioning this tour even once on social media, @TwatterLord ? It's coming to your city Saturday, btw. Come say hi.

Since then, Dark Operative has been tweeting or retweeting barbs clearly directed at Anderson and Southern Lord, including these two:

fuck all the record labels and music labels that sign artist and don't help them and love when they die so they can take all the streaming's/ money y'all labels let these artist do anything y'all don't care ! Y'all labels are culture vultures just like most of the media - Lil b

Meanwhile, Dark Operative hasn't been silent on Facebook either. Commenting on a response to the Steve Albini-inspired missive above, Dark Operative had this to say:
"Way too many modern indies run their structures and build their contracts around the same insane early-mid 90's major label model. And they keep preying on artists too young and too inexperienced with business to know what they're signing. Even if a lawyer tries to explain, oftentimes the false 'prestige' of 'being signed' overrides all sense and logic that may have been gleaned."
Dark Operative honcho Eyestone also claims to have dared Anderson to attend a Santa Ana, CA Power Trip show earlier this month, texting "his bitch ass" directions: 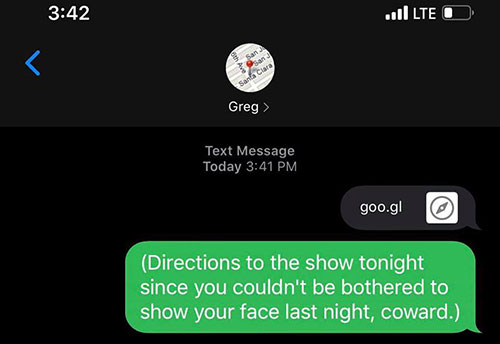 The previous day, Southern Lord Recordings Europe liked a Tweet (obliviously, apparently) in which Dark Operative called Anderson an "asshole that doesn't want you to hear" Power Trip's music. Dark Operative responded derisively via Facebook, offering, "I just realized that a robe and a bunch of fake fog would adequately cover clown shoes." It will be rather fascinating to see what transpires in the coming months with regard to Power Trip's forthcoming album. Hopefully some lurid details will be made public. UPDATE: Dark Operative responded to our article with the following:

This makes it seem like I just started talking trash for no reason. First move before any of the response was Southern Lord falsely issuing a copyright claim/takedown with Spotify on "Hornet's Nest." You could have reached out to me for comment/context?