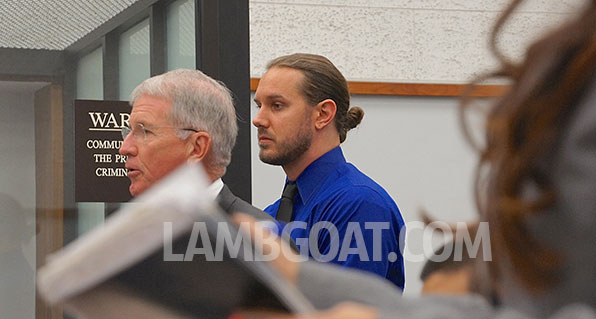 Jailed As I Lay Dying frontman Tim Lambesis filed a $35 million lawsuit late last year against the medical staff at two Southern California detention facilities for denying him prescription medication and "gross negligence." This revelation comes via Loudwire. Specifically, Lambesis alleges that he was denied anastrozole, a drug used to offset the side effects of anabolic steroid withrawal, a medication Lambesis had been prescribed prior to his 2014 incarceration. As a result, Lambesis says that he suffered "exponetial terror" due to the potential of "male breast development." Furthermore, he claims that he now suffers from gynecomastia, which is swelling of the breast tissue in males caused by a hormonal imbalance. A portion of the claim reads as follows:
"Plaintiff claims a nurse, doctor, and psychiatrist at the San Diego County Sheriff Department's Vista Detention Facility and George F. Bailey Detention Facility acted with deliberate indifference to his serious medical needs in May and June 2014 by denying him medication which had been prescribed for him prior to his incarceration. Plaintiff also alleges a pendent claim for '(medical) gross negligence' in violation of California law. Plaintiff seeks $35,500,000 in general and punitive damages."
On April 11 of this year, the court dismissed Lambesis' punitive damages claim, however, his medical negligence claim is set to proceed. Two documents concerning Lambesis' legal filings can be found here and here. Lambesis was sentenced to six years in prison in May 2014 for attempting to hire a hitman to murder his estranged wife.