The Ghost Inside involved in fatal bus wreck 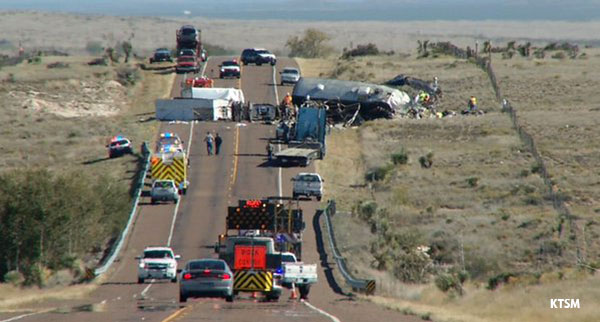 The Ghost Inside were involved in a serious bus accident near El Paso, Texas today. The band's tour bus collided head-on with an 18-wheeler. A report from KFMX says that David Summers, tour manager of The Wonder Years, stated that all members of The Ghost Inside and their crew are alive. However, ten people, including members of the band, were taken to area hospitals. "We have accounted for 12 people. Two have been confirmed deceased and 10 are injured," state trooper Moises Vasquez said. "Some were transported to local area hospitals in Hudspeth and others were transported to El Paso." The two fatalities are allegedly the driver of the bus and the driver of the tractor trailer. UPDATE: Nick, brother of The Ghost Inside drummer, Andrew Tkaczyk, has issued this:
"For those not in the know, my brother Andrew was airlifted to the hospital this morning after his bus was involved in an accident. He is alive, however he has suffered head trauma, as well as broken bones in his lower extremities, and a shoulder injury. He is currently in ICU and may require surgery. "Please give us all your prayers, thoughts, whatever it is that you do, as we need it. "I ask out of respect to contact me instead of my other family members with any questions or inquiries, as I will handle it due to my parents being extremely distraught right now. Thank you."
UPDATE #2: The following statement has now been issued via The Ghost Inside camp:
"Thanks to everyone who reached out with concern today. The Ghost Inside was involved in a serious bus accident outside El Paso, TX this morning. All 5 band members + all members of the crew are alive and currently being treated for their injuries. Please keep them in your thoughts as well as their bus driver and those in the other vehicle who did not make it. Unfortunately, all US shows on the Locals Only Tour are cancelled. Refunds available at point of purchase. We will update you more when we can."