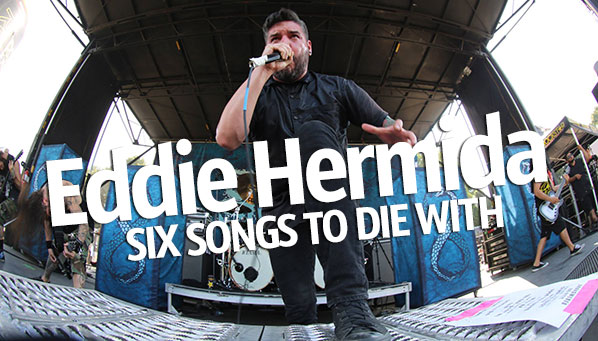 It was a year ago today that Eddie Hermida was revealed to be the new vocalist of Suicide Silence, roughly eleven months after the untimely passing of Mitch Lucker. While many Suicide Silence fans had not heard of Hermida before then, he wasn't exactly a nobody. For a decade prior to joining Suicide Silence, Hermida fronted another popular deathcore band -- All Shall Perish. He was also a member of Bay Area thrash/metalcore outfit Gunmetal Grey. In other words, he's paid his dues. Of course, part of paying one's dues means that Lambgoat will eventually bug you to find out your Six Songs To Die With. Let's do it.


Eddie Hermida: Mr. Bungle has always been one of those bands that makes me want to push the boundaries of my skill as a musician. A true artist is never done learning and this band inspires me to keep growing and learning. Not to mention this song is absolutely bat shit crazy and since I am stranded somewhere why not lose my mind too!? I can listen to any Mr. Bungle record at any time but this song will always be a favorite of mine.


Eddie Hermida: I remember one time I had walked into my house after school, flipped the TV on (instead of doing my homework) and "I'm Broken" was playing on MTV. I was hooked. The video was so simple and punk rock! The dudes looked cool as hell and the music was crushing. I mean everyone knows the tune. I know that I would climb up any coconut tree or kill a bear to this song. Pantera's "I'm Broken" will be my hunting music!

The harmonies in this song blow my mind! The Beatles will forever be my favorite rock and roll band. There are too many songs to choose from but I remember one stoney night where I was on tour having a hard time and this song came on. It soothed me and made me want to learn each individual part. The song is hella good!


Eddie Hermida: I know that if I was stranded anywhere I would miss the crap out of my mom. Whenever she, my brother and I would go on road trips Paul Simon's greatest hits was coming with us. "Kodachrome" always hyped me up! The piano work and drums on this song really make you want to get up and move. I would bring this song with me because it reminds me of my family.


Eddie Hermida: This song is sheer power and menace! "Evisceration Plague" has always made me want to smash the world so I would play this song any time I needed to feel better about myself. Cannibal Corpse will forever be the reason I love heavy music and strive to be heavier and heavier, so I definitely want this song with me. They absolutely crush!


Eddie Hermida: I am a real big fan of vocal harmonies and singing in the round. The end of this song always makes me forget that there are any kind of problems in my life so I would play this song pretty often on a deserted island. The message in this song is something I identify with as well. I love calling out religion as much as possible; showing ourselves that we don't need religion as a crutch. Amazing band! Perfect song.

Not bad. Wasn't this guy in another band?

@rick, all shall perish

the song is called THE NOOSE...not Halo that's like saying that half the man i used to be by stone temple pilots is your favorite song

Good call on the Bungle.

What kind of a n00b picks NEW cannibal?? Busted!!