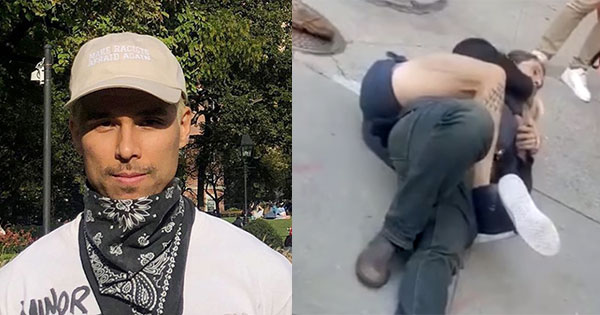 Brian Kemsley, guitarist of defunct New England hardcore band Outbreak, was instrumental in preventing the alleged abduction of an infant in New York City earlier this month. According to the New York Daily News, Kemsley, a 33-year-old Muay Thai instructor, encountered a man trying to snatch a baby from a woman's stroller in Madison Square Park. Kemsley subsequently used his martial arts skills to subdue the man until police arrived. "The man is saying things like, 'How do you know this isn't my baby? Why are you helping her? This could be my baby, you don't know that'," Kemsley told the NY Daily News. Kemsley employed the "rear naked choke" and "seatbelt hold" to prevent the raving man from hurting others and others from hurting him. "Throughout the whole thing, it became clear that this man actually had mental issues," Kemsley added. "If I let go, who knows what people would have done." Video of the incident was captured by a bystander and available for viewing below. The assailant was eventually taken to Bellevue Hospital for psychiatric evaluation, police stated. Meanwhile, the baby's mother returned to the scene to express her gratitude to Kemsley. Launched in Maine in 2002, Outbreak released a handful of records through Bridge Nine Records, Think Fast! Records, and Trustkill Records before disbanding in 2011.