Sumac May You Be Held 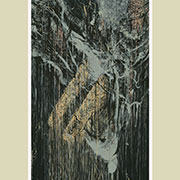 1. A Prayer for Your Path 2. May You Be Held 3. The Iron Chair 4. Consumed 5. Laughter and Silence
2020 self-released
Our score 9
by Colin
9/21/2020
Sumac's members are certainly no strangers to pushing conventional standards — guitarist/vocalist Aaron Turner helped usher in the early wave of 2000s post-metal with his group Isis while bassist Brian Cook's band Botch redefined 90s hardcore. But since their inception in 2015, Sumac has been a vehicle for its members to explore more transient, ephemeral musical ideas. Combining elements from each of their other current projects — the murky sludge of Turner's Old Man Gloom, the arty instrumentals of Cook's Russian Circles and the chaos of drummer Nick Yacyshyn's Baptists - with ideas and techniques borrowed from freeform and jazz, the band has carved out an intriguing niche in the heavy music world. May You Be Held is the fourth full-length album from the trio, sixth if you include their two improvisational collaborations with Japanese experimentalist Keiji Haino; and you should, because it's clear the sessions with Haino have had a tremendous impact on the band's creative vision. On 2018's Love In Shadow, following the first of their collabs, Sumac began to broaden their expressive and methodical approach, integrating swaths of wide-open space and exploratory improv into their style of heady creative metal. Now, on the heels of their second album with Haino, Sumac has dug even deeper into the well, reemerging as a band pushing the limitations of themselves as well as extreme music. This new collection of material is stemmed from the same sessions as Love In Shadow, but exists more as a continuation of the band's development than an extension of that album. May You Be Held alternates between structurally defined compositions and loose improvisations, showcasing the band's polarizing methodologies while remaining a cohesive offering. The album's opening track, “A Prayer For Your Path,” creeps through waves of feedback and cresting tones supplied by Yacyshyn's bowing of a vibraphone, a piece that takes root in the group's experimental exercises. The haunting rise and fall of the vibes are accompanied by a distant scream, invoking eerie atmospheres, but the ambiance is soon interrupted as the record delves into heavier territory. The album's two compositional tracks, “May You Be Held” and “Consumed,” comprise the majority of the run-time, clocking in at 19:53 and 16:58, respectively. They both also steer the closest to Sumac's earlier output. But as the group blasts through bouts of sludgy riffs and expressionistic noise, a growth in their approach is clearly noticeable. The amorphous structures bounce between moments of repetitive minimalism, technical brilliance and washes of atonal drones. Turner's off-kilter heavy riffing, Yacyshyn's inventive fills, and Cook's pounding bass fuse lethargic doom with punishing hardcore and an avant-garde artiness. But the three-piece truly shines on their free-form pieces. On “The Iron Chair,” Sumac use extreme volume to their advantage, as the track peaks with blasts of intense drumming and screams erupting through valleys of abstract guitar improvisation. The musicians play off each other, giving and taking as a cohesive unit. And “Laughter And Silence,” the album's closer, shifts towards a more ambient approach. Accompanied by Faith Coloccia of Mammifer on organ, Turner's guitar playing veers toward a jazz modality. As the group hangs back and lets the piece develop, hints of Robert Fripp and Brian Eno's collaborations shine through, the empty spaces becoming as important as the sounds they spell. Bottom line: Aaron Turner has always been blending the ideas of art and music, whether it was with Isis, Old Man Gloom, his experimental ambient project House Of Low Culture, or even the recognizable aesthetic of his label Hydrahead Records. But in more recent years, it has been evident that he is looking to grow beyond what we traditionally view as metal. His solo guitar pieces, as well as his work with forward thinking artists such as Daniel Menche and Tashi Dorji are proof of this. But in Brian Cook and Nich Yacyshyn, he has realized perhaps his greatest collaborators yet. The duality of Sumac's musical approaches – sludge metal and free improvisation – make May You Be Held one of the most fascinating and enjoyable releases of his career.