Watch the video exclusively on Lambgoat 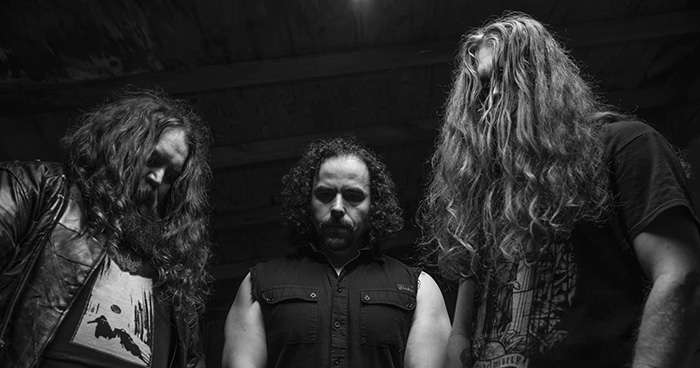 Our goal was to make the video as gritty as the song and subject matter. With help from the filmmaker, we were able to incorporate creative visuals that tell the story behind the track. The final product is just as bleak as we hoped it would be.

Directed by Dusty Cooper (Troy Bennett's Graveyard Lips), the video sets a violent scene in which the victim (Steven Ban) meets his fate before his reawakening as something else entirely. Recorded by James Whitten (Thou, High on Fire, Eyehategod), Faustian delivers a unique style of blackened death that seamlessly shifts from razor-sharp maelstrom to dirge-like grime as the three-piece meld violent urgency and claustrophobic atmosphere into a frenzied sonic catharsis.

The album's haunting cover art is a 1870 painting from Polish artist Adam Chmielowski titled "Death and conflagration from the Disaster triptych."

Faustian is out now on all major streaming platforms and on CD worldwide via Black Lion Records. More information regarding vinyl will appear at a later date. Purchase "Birth of Apparitions" here.

I'd sell my soul to un-know of this news

Not bad. But whats up with the minute and a half of stupid noise in the beginning? Also why post a blurb about the cover art with no picture of the cover art?

Thanks for posting a pic of the cover art

Should have added Alabama and Florida to tour all the worst states in America!

^^^ I don't see California or New York either.