Listen to the full album stream exclusively on Lambgoat 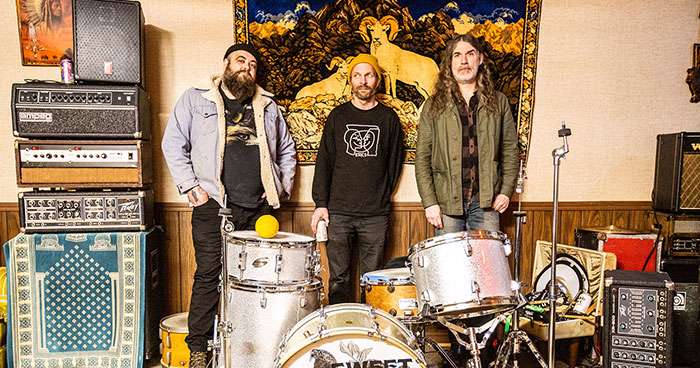 Threes sees digital release on Pax Aeternum this Friday, November 11th, with the vinyl version to follow via the band's Hawthorne Street Records in January. Find digital preorders here and physical preorders here, and see the official video for the lead single, "Coats," down below.

Threes is the fifth LP from Chicago's Sweet Cobra.

Trying to describe or label Sweet Cobra would be doing them a disservice. At this point, they've accomplished the rare task of developing their own unique voice in a choir of thousands. Threes is simply an honest rock album that harkens back to the day that musicians got together in a room and created with no agenda aside from organizing noise. There are a lot of familiar sounds, but nothing is on the nose. With Threes, Sweet Cobra has truly broken the mold for what is expected of punk-influenced bands and left the door open for other acts in the heavy spectrum of music to follow.

Aside from the tonal variety heard in the instrumentation on Sweet Cobra's Threes, the production displays a wide range of timbre as well. This is in thanks to the broad cast of engineers who helped capture the recording. Threes was recorded at Earth Analog by Matt Talbott (Hum), with initial tracking done at Electronical by Allen Epley and Eric Abert (Shiner, The Life And Times), with mixing handled by Kurt Ballou (Converge) at Godcity Studio, mastering handled by Magnus Lindberg (Cult Of Luna), and the cover art created by Bill Connors. Joining drummer Jason Gagovski, vocalist/bassist Timothy Remis, and guitarist/pianist Robert Arthur Lanham Jr., Sarah Olmsted adds backing vocals to "Wet Brain," and Matt Talbott provides additional guitar on "Soft 11."

Watch for new videos from Threes as well as new live dates supporting the album to be posted alongside updates on the vinyl version and more over the weeks ahead.

Against Me!’s Laura Jane Grace and Life of Agony’s Mina Caputo get heated over social media post
Like Moths To Flame fire bassist Aaron Evans, "he has abused the platform he was given"
Andy Williams currently not involved in Ex-ETID members band
Pantera removed from Rock am Ring and Rock In The Park 2023
Glass Casket sign to Silent Pendulum, new album in the works after 17 years
more top news