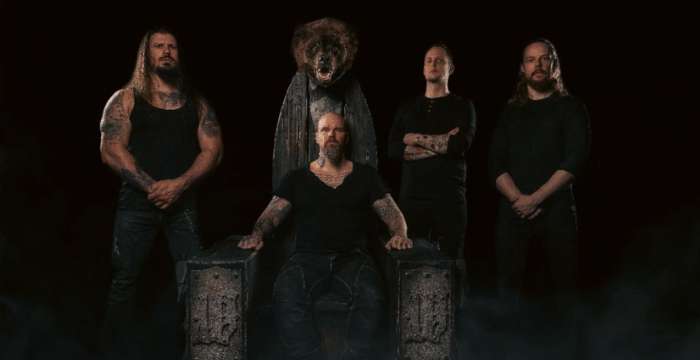 A new music video has been released from Wolfheart's latest full-length, King of the North, out now on Napalm Records. The song, titled "Cold Flame", features Karl Sanders of tech death unit Nile.

""Cold Flame'" is deep diving trip into the mythology behind the northern lights. The mystic phenomenon that has been enchanting people in the nordic realm for ages. Cold and grandiose are words to describe both the stories behind the lyrics and the music itself. Monstrous growls from Karl Sanders were a cherry on top of a cake to rise the song into a new level."

Each song on 'King of the North' is dedicated to a different story of Finnish mythology – underlined by Wolfheart's grand, crushing songwriting and production. "The King", for instance, tells the tale of the forest god with horns and pianos accompanying heavy guitar riffs and solos, before raising the energy levels once more on the relentless "Cold Flame" featuring Karl Sanders. "Ancestor" is the album's most frostbitten anthem, unleashing Wolfheart's acclaimed brand of crushing blast beasts and cutting-edge vocal performances alongside guest Jesse Leach of Killswitch Engage.

﻿'King of the North' is a true masterpiece of melodic death metal, crafted with loads of attention to detail and intricate mythology-driven storytelling – showcasing Wolfheart at never-before-heard artistic levels!

Wolfheart's guitarist/vocalist Tuomas Saukkonen about 'King of the North':

"After Wolves of Karelia, it made a lot of sense to continue writing thematic albums, but this time I wanted to travel a lot further in history than the Second World War and went straight to tales about creation of the Nordic world, ancient gods of the north and majestic nature. The colorful theme also inspired me to write the musically most diverse Wolfheart album and also bring the biggest variation of vocals than ever before, putting Lauri and Vageliss in their well-earned spotlight."