Will feature over 40 women artists collaborating on the project 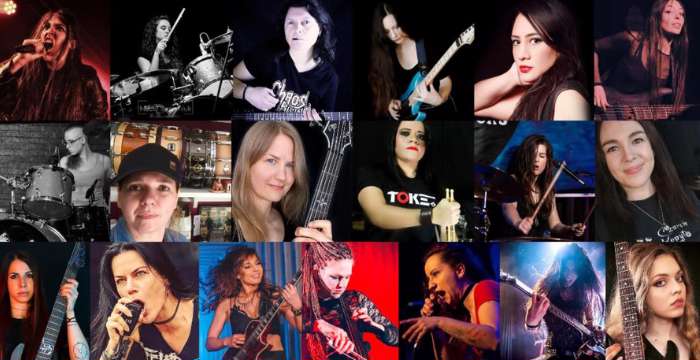 Chaos Rising, an independent international collective of women in metal, will release a double album called The Singles showcasing the talent of over 40 female artists. You can listen to two of the tacks below, with the full double LP coming on October 14.

Formed in 2019 by French multi-instrumentalist Stéphanie Nolf (Unsafe, Syrinx), Chaos Rising is a collaborative international metal music project composed of women from all over the world who play, create, and share new songs in different metal styles. In a collaborative and inclusive spirit, Chaos Rising welcomes, encourages, and invites every female artist interested in metal music to be involved in any kind of aspect of CR music and project. Women are welcome to join by either playing, recording, designing album art, writing lyrics, working with album production or promotion.

"Our aim is to showcase women's talents and fill the gaps in which women are underrepresented in metal. The ambitious model has so far resulted in twenty singles/video releases, spanning metal subgenres, and featuring thirty-five musicians from eighteen countries, including some of the biggest names in metal (eg. Britta Goertz - Critical Mess/Hiraes; Luana Dametto - Crypta/

"We publish a new song each month in different metal music styles: thrash, death, heavy, doom, symphonic, hard rock, hard core, brutal death, melodic metal... More than 40 artists already joined us. If you are interested in working with us, don't hesitate to contact us and share our work !!"

CD 1 - For The Head tracklisting:

CD 2 - For The Heart tracklisting: