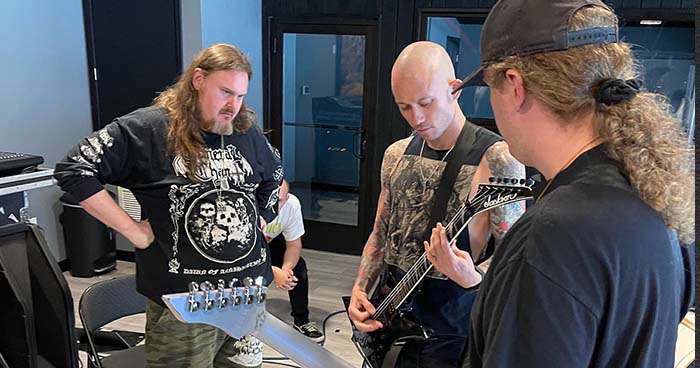 Dallas death metal band Frozen Soul recently took to Facebook to announce that they have been spending some time in Florida recently and that they teamed up with Trivium frontman Matt Heafy to produce the group's next album. Crypt of Ice, the band's debut album, was released in January of 2021 through Century Media Records.

Hey everyone, we have a huge announcement that we are so excited to share! We would like to welcome Matthew Heafy of Trivium to our cold crew! Matt will be producing our next full-length album! Matt is a huge inspiration for us and one of the bands that got our guitarist Michael Munday into playing metal. It's an honor to work with someone who is so passionate about heavy music!

This past week we were invited out to the Trivium hangar in Florida to work on preproduction tracks and we had a blast! We are so excited to unleash this unbelievably heavy, ice cold and glacier-crushing record on all of you!

Matt also spoke about the chance to work with the band:

"It is my distinguished honor to announce that Frozen Soul has entrusted me to produce their next full length album.I couldn't be more excited. Soul is a band that I am not only a big fan of, but one that I believe can truly make a massive impact in the heavy music world. Metal fans, extreme metal fans, hardcore fans - everyone agrees that Frozen Soul is something special. To have a band that already has so much of their signature sound already fleshed out - and presented in such a unique way that's entirely their own - is inspiring to me.

I can't wait to - together with Frozen Soul - unleash the new album on the world!" 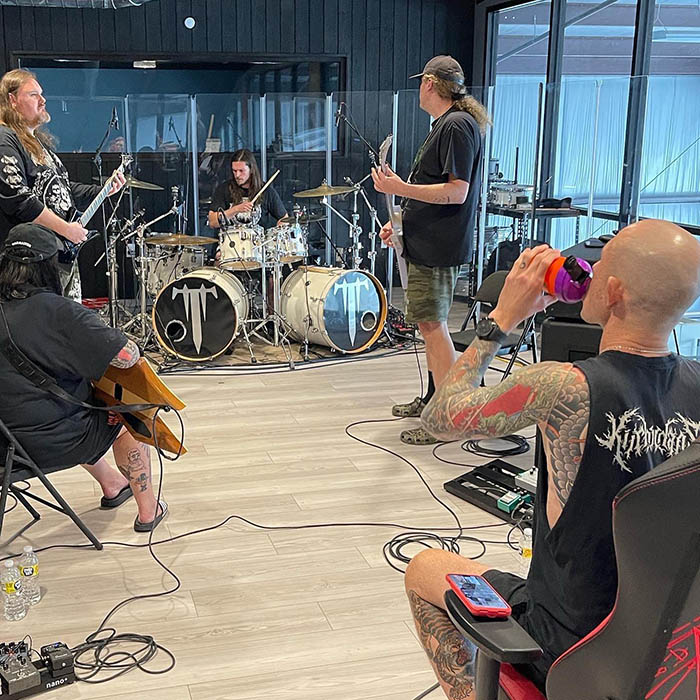 Wonder if Frozen Soul will cover a Trivium song? You know now that they're selling out and all

did matt get cancer? Why is he bald?

Lol @ gutminator in that pic

Where's the girl that's the only reason this band gets booked?

Between this and Creeping Death doing their new album with Adam D, I'm wondering if all the actual good, real metal producers died or disappeared or something??

I can imagine the smell of those dudes... ingot a headache now. Thanks lambgoat.

Yo what's good ya'll? Freddy "Madball" Cricen here of legendary Florida hardcore stalwarts Madball. Thank you for allowing me to represent this amazing and unique culture, this thing of ours, worldwide for over 30 years. Stay up, stay true n fight the system always! RIP Ivana Trump true NYC legend you will be missed. Hit up our merch guy or see me or Hoya in your city to inquire about becoming registered Republicans. For every $50 spent on merch we will donate $2.50 to the Trump campaign fund. Stay true and remember Stay blaaaaaaaa--aaaaaa---aaaaaaack n' blue

So they want this new album to suck even worse than before?

lol awaiting the new album. It's gonna be called"I'm a Teenager."

did matt get cancer? Why is he bald? ^ he's triple jabbed

Hope they don't allow Heafy to spew his pro-Japan propaganda about WWII.

did matt get cancer? Why is he bald? Male Pattern Baldness reered it's ugly head. Dude's hair was getting real thin and pubey so he probably decided that bald looked better than a head full of dick fuzz.

Texas has a collective IQ of 85 and their blood type is warfarin. Anyone who couldn't cut it anywhere else and had to move there will back this.

anonymous 9 hours ago You guys all sound like elitist neck beard whinging fat cu&@s Heafy defense force arrives? He's ok, made some good albums and some bad ones, but he makes too much music now and the quantity is diluting the quality.

anonymous 26 minutes ago More like Matt Heafty. ^^^ He's the skinniest one in the pictures, you dumb asshole.

Heafy defense force arrives? He's ok, made some good albums and some bad ones, but he makes too much music now and the quantity is diluting the quality. Couldn't agree more. He should focus more on writing quality music instead of being a twitch streamer lol He also tries WAY too hard to be a great singer now and it always comes off as too try-hardy compared to how he sang cleans on Shogun and Ascendancy.

Matt Heafy tries do hard with everything, even just trying to prove his taste in music

Is that the chic bassists feet in the secod pic? I wonder if they smell.