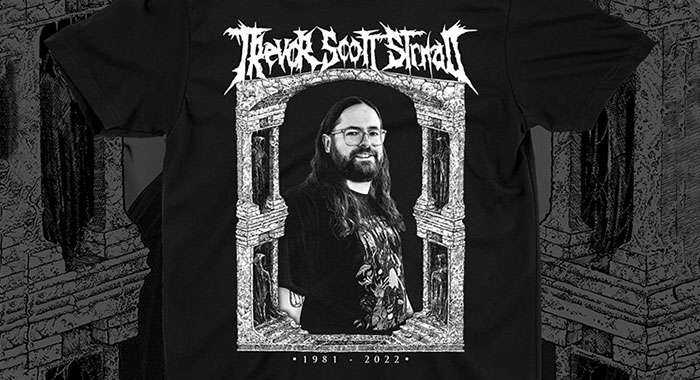 It's been several weeks since the untimely passing of The Black Dahlia Murder frontman Trevor Strnad and the group has now issued an "official memorial" t-shirt in his honor, with proceeds destined to benefit the Common Ground Resource & Crisis Center and help his family cover final expenses.

The band had the following to say about the shirt:

"We thank all Trevor's friends, family, and The Black Dahlia Murder fans around the world for the massive outpouring of support during this time. The Strnad family has approved this official memorial t-shirt in his honor. All proceeds will help his family cover expenses incurred by Trevor's death and benefit the Common Ground Resource & Crisis Center. Tees are available now from Night Shift in the US, Probity in the UK & Direct Merch in Australia.

"Special thanks to Mark Riddick (illustration), Nathaniel Shannon (photograph) & Spearhead Illustration (logo) for generously donating the art for this t-shirt."

There is a group of Australian retards who can handle the cost entirely.

Yeah it's all parkway drives fault, and not singing about Satan for 20 years

they need help with funeral expenses because Life Insurance doesnt pay out when you Kurt Cobain yourself And trying to be edgy doesn't get your mom off your back about moving out, but it certainly enhances your chode status.

^^^ own my own house. go back to work at McDonalds

^^^ own my own house. go back to work at McDonalds SO CREATIVE, BROOOOOOOOOOOOOOOOO. Lying on the internet doesn't make your life less pathetic.

^^^ next level idiot, as if anyone working minimum wage was by choice, you entitled douche. Besides, anyone can 'own a house' anonymously. I own a yacht and the bank you pay your mortgage to.

Anything come of the police investigation?

anonymous 1 hour ago King tiny wiener himself. Got any other mind numbingly dumb takes on bands you don't like? yes. this band would be nothing without one breakdown, and probably will fade back into 3rd billing deathcore band on 400 cap rooms soon.

I AM IN THE WRONG THREAD

I AM IN THE WRONG THREAD Yet still a massive mongoloid...

"own my own house" we all believe you and more importantly, we all care deeply. please let me suck your dick, mr. homeowner.

They owe it to the fans to let us know wtf really happened. That drama with his skank new girlfiend was super shady.

does he know if he has a mortgage, the bank owns it?

Oh I have mortgage for sure only put 15% down im in debt up to my eyeballs but still find time to talk shit with you beautiful bastards Rightttttttt. What's your mom making for dinner tonight?

Word on the street is tbdm already recruited whoever is the current lead guitarist in arsis to be their new singer just to f*ck with james and noah some more.

Who bought his CD collection?

How did Trevor go out? I heard it was heart failure after some boozing and pills.

"How did Trevor go out? I heard it was heart failure after some boozing and pills." Smelling your mom's feet.

do they already come smelling like sweat and cheese, if not then what's the use.

f*ck this groomer . Prob offed himself cause he was about to get exposed Why are you sharing your eventual life story? Get your dull edge ass outta here.

RIP man. And i agree with the comments, those Parkway Pussies are responsible for the final straw on Trevors mental decline. f*ck those cangaroo ass sniffing bitches.

I ordered one but MAN this inflation is killing me! The market took a Parkway DIVE! Get it lol

Parkway owe the rest of their career to Trevor

anonymous 16 hours ago I AM IN THE WRONG THREAD Yet still a massive mongoloid... ^^ spot on.

f*cking shipping to Canada is more than the shirt. Weak.

When I'm dead, just throw me in the trash

"man, people really out here blaming parkway drive" Which one of you A$$ babies can explain this $hit?