Two songs from the group's debut record can be streamed now. 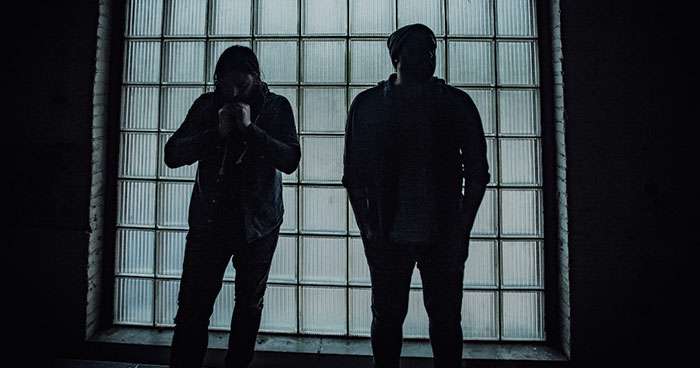 orphantwin are a band of brothers — quite literally. The blood bond between Norma Jean vocalist Cory Brandan and his brother Matthew Putman operates as the beating heart of this Arkansas-based duo.

Today, the duo has shared the double single "Deathsurf" and "Headphones or Die":

"'Deathsurf' was the song that birthed orphantwin," says Matthew. "Cory and I started experimenting in the studio, writing shorter, hyper-focused songs based on the music we grew up with, filtered through the lens of our current songwriting and production aesthetic. 'Deathsurf' draws inspiration from bands like Angel Hair, Voivod, Burned Up Bled Dry, and Slayer."

Cory furthers, "I had an incredibly vivid dream a few years ago. I saw a giant wave rising up over the tree line. I saw myself trying to get everyone inside before it reached us, I looked over again and I saw a much larger second wave behind the first. It covered the sky, and when it crashed, it consumed everything in its path. orphantwin is a studio project with my brother, Matthew. We talk about everything, but especially the ways our brains process things and how our lives together are a wealth of inspiration. We wrote some songs about cataclysmic waves, and we wrote some songs about how, in hindsight, I should have surfed that shit."

Regarding "Headphones or Die," the duo states, "orphantwin at its heart is a studio project. Using the studio as an instrument allows us the freedom to take a 2-piece garage band and fill the gaps with sampling, sound design, copying, pasting, stretching audio, finding sounds we want from the space around us, and piling it on. Garage pop."

"This is a brothers project," says Cory. "Matthew and I look alike. Our voices and mannerisms are very similar. We're only a year apart in age, so people have always referred to us as twins. orphantwin is the idea your reflection is a twin of you in another world. It's about brothers."

orphantwin quietly materialized over the past few years. During the recording of Norma Jean's All Hail in 2019, Matthew contributed heavily as a co-writer, co-producer, percussionist, and engineer. It's as though he was a ghost member of the band. Among his contributions, they collaborated on the opener "Orphan Twin." When the world shut down in 2020, Cory and Matthew resumed writing together. It naturally morphed into its own beast as they progressed.

On a whim, they shared the demos with Solid State and landed a deal. They finished what would become Future Classic in Springfield, MO, with Norma Jean bassist Michael Palmquist behind the board as producer in 2022.

Ultimately, orphantwin welcome everyone into the family on Future Classic. "My goal is to create escapism," Cory finishes. "I love it when art helps you get away from all of the worries of your life or the world. There's no agenda. Lyrically, it's all open to interpretation. So, ride the wave."