With a name like Skullshitter, it has to be good. 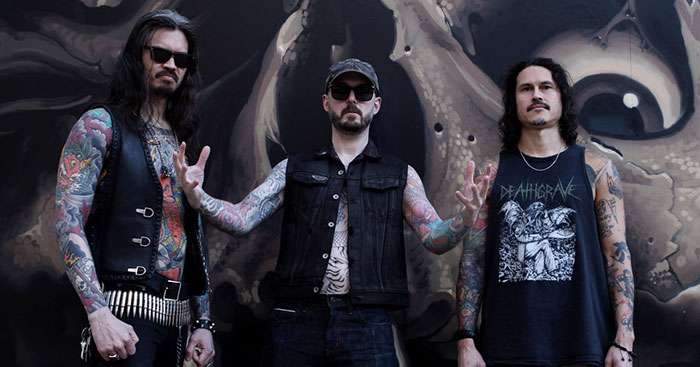 New York City deathgrind trio Skullshitter will release their latest aural assault tomorrow (Friday, May 6) via Nerve Altar. The new album is titled Goat Claw and purports to feature "sixteen grave-tripping tracks of old-school grindcore steeped in mind-bending psychedelia." Find out for yourself below, where the record can be streamed in its entirety a day ahead of its release.

Goat Claw, which the band calls "a fully realized Satanic grindcore experience," was recorded by Nolan Voss, mixed by Jamie Uertz, mastered by Gregg Wilkinson, and features cover art by Tas Danazoglou. The album will be available in digital and vinyl formats.

these guys recorded this whilst on work release

I AM ROCK AND ROLL!

Are these guys vaxxed and boosted?

no way these guys are vaxed

Dude let's take two "metal" words and put them together. 🤡

Anyone fancy a t shirt?! Me please!!

The guy on the left looks like a cross between Danny Trejo & the Latino security guard in Repo Man. 😂😂😂 Crap bandname literally (or shiterally 😂)

Yo these guys are heckin boosted (quad boosted riffs)

The guy in the middle looks like Travis Reilly 😂

With a name like Skullshitter, it has to be good.

what a band name

You expect a death grind band to be dressing in polos and slacks for their band photo shoot?

^^^ yes they should be dressed in polos

Vaxed and boosted? Don't care. More worried if they are Laxed and Poosted. Put up or shit up, amirite?

Honk the Goose here; I'm vaxxed, boosted, and ready to have a HONKIN good time

You expect a death grind band to be dressing in polos and slacks for their band photo shoot? >>> No, but you expect them to dress however you want them to dress.