Technical death metal band Fallujah have some new members and some new music. 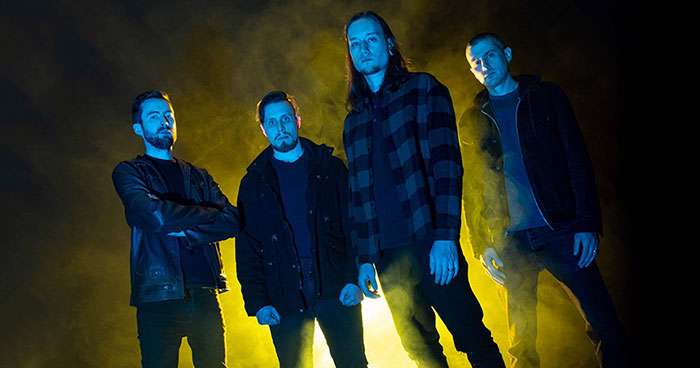 Commenting on Empyrean, Carstairs says: "After such an experimental expression [with 'Undying Light'], we sat down to write 'Empyrean' completely refreshed and inspired, It was like the musical tension of the last decade had been released, and we were ready to achieve goals the band had originally set out for. 'Empyrean' is truly a return to form because we are doing what comes naturally to us, but with an intensity that we haven't achieved in the past. We set out to create something that represents the band and its history in its purest form while also pushing our technical abilities further than we have ever gone.

"Every Fallujah album has been a reflection of whatever ideas felt the freshest and exciting to us at that particular point in time. We've developed our own defined sound over the years, but on this album, our new members helped bring in some new perspectives. We incorporated new elements such as counterpoint and tempo changes but maintained elements integral to the band and even brought back techniques used in older records. At this point, it's all about elegantly presenting the sound we have cultivated over the last decade."

Today, the band has laid out the details of the forthcoming record and unleashed its ferocious first single, "Radiant Ascension," which is accompanied by the music video produced by Defiant Digital Productions and directed by Robert Graves.

Empyrean is a specialist's paradise. As a rhythm/lead player, Carstairs enters a league of his own. Tracks like "The Bitter Taste of Clarity," "Radiant Ascension," and "Eden's Lament" illustrate he's upped his chops and boosted the emotional outlay. Throughout, he's careful about compositional placement and how his radiant, palliative leads complement Fallujah's sapid landscape. Drummer Baird tastefully and aggressively holds down the fort, grooving and syncopating admirably on "Radiant Ascension," "Embrace Oblivion," and "Mindless Omnipotent Master." Fallujah's long-standing timekeeper has always been great, but on Empyrean, he's superior. Right there with him is recently joined bassist Evan Brewer, thundering and bopping on, around, and against Baird's foundation like a seasoned prizefighter. "Duality of Intent" is but one of Brewer's standouts. Although known for his guitar work outside of Fallujah, newcomer vocalist Kyle Schaefer's low-end and mid-range bark perfectly matches the existential threat-themed lyrics.

Throughout Empyrean, Fallujah surprise. Musically, lyrically, and with their bevy of guests, they add hard-to-describe depth and musical import. Vocalist Tori Letzler (Batman V Superman: Dawn of Justice) reprises her angelic role on "Radiant Ascension" and "Artifacts," while Chiasma's Katie Thompson also reappears to elevate "Embrace Oblivion" and "Into the Eventide." Chaney Crabb of Entheos and Cyborg Octopus's David Wu tender their considerable talents on "Mindless Omnipotent Master" and "Duality of Intent," respectively. Celebrated artist Peter Mohrbacher (Serenity in Murder, Rainbowdragoneyes) replays his role on Empyrean as well. Truly, this is an all-star cast appearing on a momentous album by a band reaching beyond.

"From the beginning of this writing process and until the end, we painstakingly made sure every aspect of this record would blow away our listeners," states Carstairs. "We meticulously scrutinized every riff and note choice. There has never been this much effort put into a Fallujah record as we did with 'Empyrean,' and the result is a truly monstrous record that we believe is the band's best work by a significant margin. We showed you restraint on the last record. Now, let us show you what happens when we leave it all on the table."