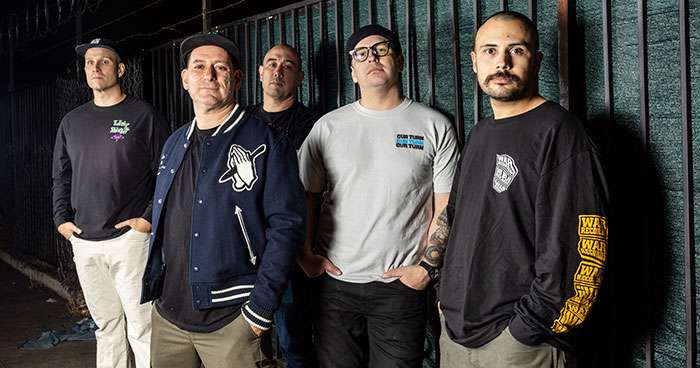 When Words Are Not Enough, the debut LP from Los Angeles straight edge hardcore band Berthold City, will be released tomorrow, March 18. In advance of its release, we're streaming the entire outing below.

Formed in 2017 by vocalist Andrew Kline (Strife, World Be Free), Berthold City's line-up is rounded out by guitarist Dennis McDonald (Internal Affairs), drummer Adam Galindo (Abrasian, One Choice), bassist John "Eightclip" Jenkins (Allegiance), and guitarist Dave Itow (The Mistake). When Words Are Not Enough was recorded and mixed by Nick Jett (of Terror) and features cover art and design by Jeremy Dean.

"It seems like it was such a long time ago when we started working on these songs, and I can't wait to share them with the world," says Andrew Kline. "We worked really hard to craft the best HC record that we could... A record that was influenced by our favorite bands that came before us, but still fresh enough to connect with the new generation. This is one of my favorite records that I have ever been involved with, and I hope you feel the same."

Stream Berthold City's When Words Are Not Enough here:

Scott to the Vogel here. Nick Jett owes me a sweet 1K for having Terror mentioned in parentheticals next to his name.

Just once I want one of these bands to turn down the opportunity to write a dopy press release for their crummy album/demo/tour/member quitting. Nobody gives a shit about these self-important write-ups.

Johnny, time to take out the trash. If you're going to still live with your parents at your age, the least you can do is help around the house. It's Eightclip, ma! Eightclip!!!

These dudes look like they could use a beer.

I played their new one, but it's just some older fellow yelling at me. Relax, guy, maybe have a Coors Light?

That one guy in the grey shirt def stormed the capital

Stop with the "debut LP" nonsense when it's your FIRST LP. You already put out a debut release years ago. You can put out only one debut release dummies.

Nice fake lettermen jacket, dad… we get it your best days were in highschool …. During the 1700's

I'm sure one of these guys is either a barber or a realtor … change your band name to "house of suck!"

Andrew kline, 50 year old edgeman. give it a rest loser. strife sucked too and so does your label.

Looks like an ad for a balding men support group

That's a middle aged man in a limp bizkit shirt

Andrew kline, 50 year old edgeman. give it a rest loser. strife sucked too and so does your label. >> Strife's singer broke edge. Calling yourself straightedge at 50 is ridiculous. You're 50, you meet a 32 year old cutie who likes you. You tell her you're straightedge. She's most likely gonna say "What's that?" She could Google the word, see Ray Cappo & Porcell dressed as Hare Krishnas, articles about straightedge gangs, Earth Crisis, all the weird shi t...bye to 32 year old cutie.

this records is what it sounds like when a plumber has to snake a drain at a theological university because it's so backed up with semen.

That varsity jacket is too small & tight on him.

Being edge in old age means you're realllllllllly really boring. Might as well be a white new balance wearing conservative.

Just cuz your "true til death" only lasted until you turned 21 doesn't mean old dudes can't still be Edge. Stop being a sellout POS and stay true to something.

^^^ How 'bout you mind your fuc kin business and focus on you being edge? By the way you don't have an "edge."

^^^ If you're straightedge how do you have an "edge" if someone who drinks beer can run a 5K but you can't? If someone who smokes makes 300K a year & you make 60K? If someone who does drugs puts out timeless music & you maybe sell half a pressing of 500 copies of your band's 7"EP?

Being Edge as a trophy is like getting those little sh1tty participation trophies they give to retarded kids. It's not special at all, even less as old leathery looking men.