'Elements of Sumac, Gojira, old Mastodon and Oathbreaker, the new record is a multi-layered beast'. 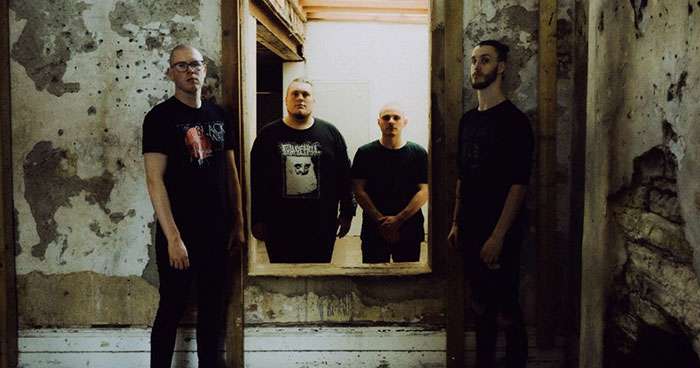 The future of British metal lies in safe hands with Conjurer, who have announced their long-awaited new album, Páthos, which will be released July 1 via Nuclear Blast.

Conjurer continue their journey as the country's most exciting young metal band with the incredible new album. Celebrating the news, the Midlands quartet have also streamed the first single from Páthos, the mighty "It Dwells."

Watch the video for "It Dwells" here:

A triumphant return from Conjurer following their world-renowned 2018 debut Mire, Páthos is a band flexing their creative muscles, deepening their approach and thought, and expanding their sound.

Bassist Conor Marshall comments: "Excited to finally be able to share the album with everyone! I'm sure this is the same for every band trying to release an album during the pandemic but it feels like we've been holding on to it for so long, so it's nice for it to not be my problem any more and to be able to actually talk about it!"

Opener "It Dwells" is the perfect introduction – earth-shatteringly heavy, unconventional, uniquely beautiful, and instantly recognizable as Conjurer. The track is centered on the contradictions of the emotion of ‘fear' – that fear can be comfortable and constant, haunting and crushing. It builds to a point of breaking – the need to end fear battling against your will to go on. The repeated screams ‘I'll have peace' are an ambivalent declaration of defiance – give in, or fight, either way fear is gone.

Of the single, guitarist/vocalist Dan Nightingale states: "I think 'It Dwells' is a good introduction to the sound of the record, from the musical influences to the lyrics and how we've drawn from what's been going on in our lives, it's one of our most personal outings for sure. It's nice to have been able to step up our game with the music videos for this album as well. Good album. Top track. Boss man."

Páthos is not an album for the half-hearted or faint-hearted. Elements of Sumac, Gojira, old Mastodon and Oathbreaker, the new record is a multi-layered beast – sludge, death, doom, black metal and hardcore influences clash and collide throughout, all masterfully finished by Will Putney's exquisite mix and master.

The fifty-minute runtime of Páthos is not without its moments of the sublime, with post-metal nods to Conjurer and PIJN's acclaimed Curse These Metal Hands project throughout. That a band can be at once so triumphantly beautiful and gut-punchingly heavy is testament to Conjurer's quality, and a surefire sign of their future longevity at the top of Britain's heavy music scene.

Not on Mastodon's level. Not even close.

who tf let them get away with writing this much

Yep this shit sucks. Poser edge lord cuck bois on this site. find this "heavy af" but in reality it's poser garbage. Lol @ anyone claiming this as good music.

this band is good.

By the look of the second guy in the pic, It Swells

the only good thing this crap did was to remind me to listen to some Black Tongue today.

Lol. Don Woodruff is not stoked.