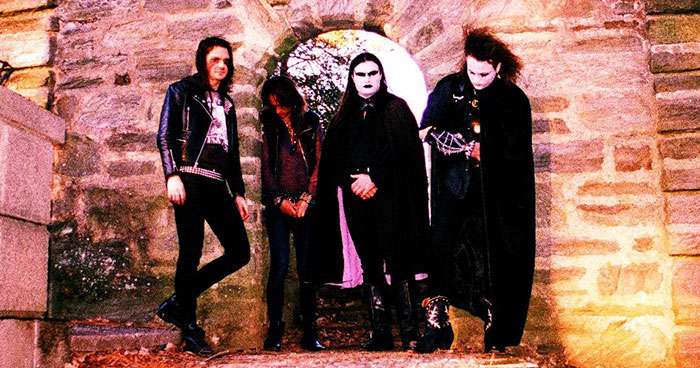 Ecstasies of Never Ending Night witnesses Philadelphia's Devil Master at its core - their roots in ritual magick have never been more prominent. Recorded live to analog tape by Pete DeBoer (Blood Incantation, Spectral Voice), Ecstasies expands on the warped riffing and dark atmospheres that have already propelled Devil Master as one of the underground's most unique and unfettered bands.

The blackened punk maelstrom of "Acid Black Mass" sets the tone for Ecstasies. Sonically speaking, it is peak Devil Master. "It's the perfect evolution of our sound," lead guitarist Darkest Prince enthuses. "It's Japanese metal-punk d-beat meets black metal. There's plenty of GISM and Mobs in there, but also Celtic Frost and Gorgoroth." "Acid Black Mass" is available today across all digital platforms via Relapse alongside a video directed by Erica Frevel and edited by Hayden Hall, watch and share below:

The path from Devil Master's lauded 2019 debut, Satan Spits On Children Of Light, to Ecstasies of Never Ending Night was long and winding. Beyond the many challenges presented by the pandemic, the band experienced a mutual parting of ways with half of their previous lineup. In the aftermath, vocalist Disembody Through Unparalleled Pleasure also assumed the role of bassist, strengthening the core songwriting trio alongside Darkest Prince and rhythm guitarist Infernal Moonlight Apparition. Fresh blood was required and found in drummer/keyboardist Festering Terror in Deepest Catacomb (a.k.a. Chris Ulsh of Power Trip and Iron Age).

As Darkest Prince points out, Ecstasies is a step above and beyond its predecessor. "This album is more mature and self-confident," he says. "It's moving past childish Satanism towards a more mature dark spirituality. This one is not relying on stereotypical tropes. It's a real magickal experience."

In many ways, Ecstasies is meant to mirror Satan Spits On Children Of Light. "This and the last album are mirrored opposites, right down to the titles," Darkest Prince points out. "There's even an instrumental in the middle of the album, like last time. I believe in balance, so there's a spiritual aspect to it. And it just feels good."

From the band's monumental "Acid Black Mass" to the spiraling death rock of "Abyss In Vision" and the layers of refined atmosphere on the closer "Never Ending Night", Darkest Prince shines across a collection of fiery, tumultuous riffs - Lyrically, vocalist Disembody Through Unparalleled Pleasure laces Ecstasies with life-affirming blasphemy and existential dread.

Ecstasies of Never Ending Night proves to be a crucial addition to the pantheon of evil satanic metal. In the end, magick reigns!

Ecstasies of Never Ending Night is out April 29 via Relapse Records.