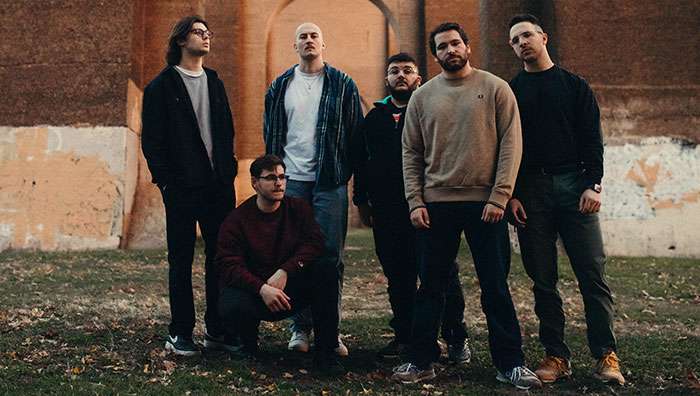 Featuring members of such bands as Typecaste, Rain Of Salvation, Hangman, and Adrenaline, the group has premiered a new single and video called "Ten Digits Away." The track's Mason Mercer-directed video can be found below.

"Ten Digits Away feels so time and place to the band right now, it feels like a special moment. It's everything I love about The music we make with Koyo perfected in its purest, realest, most honest form," says singer Joey Chiaramonte. "True to everything we're inspired by and pull from, but also true to the identity the band has formed for itself as we've continued writing music."

He continues "This song is largely about communicating, facing, and accepting feelings. Things I'm not very good at truthfully. Feelings change, they grow, they dissipate, they linger in limbo and unknowns. I think the harder moments in life that come from that are some of the most relatable. As a terrible communicator, I think for once I've said exactly what I wanted to say in this song."

Koyo will be touring the U.S. with Knocked Loose, Movements, Kublai Khan this spring.

No way this album goes Gold so what's the point?

Momentum here That mic stand had it coming. It was black also we had to make sure the 15 year old's understand to respect us 25 year old's that still live with our parents, time to start showing some f*ckin respect! next time we might not be so lucky and I won't be able to take my dads gun with me on tour, anyway buy our new shirt here https://brasscitymerch.com/products/momentum-gun-t-shirt

What's with that bro's lean tho?

dont even look emo to be emo, soupy would run all their fades. set it off by boosie plays for you weak bois that dont mess with BADAZZ

Set your goals was better

Slipknot of emo here, how many band members do you need to play this garbage? Can easily be a 4 piece god damn. So many shit bands come out of Long Island. Guess a lot of parents let their kids live rent free and give them credit cards to tour?

Love Koyo but this tune ain't it. The last single rips but none of these riffs are even memorable. I agree that they need to go down one guitarist to give the mix room to breathe. Hopefully the signing to PN doesn't lead to more of this poppier style, would prefer more of the Crime in Stereo vibes...

Three guitar players and vocalist who doesn't play an instrument? Sounds like you guys need to teach this dude how to play guitar and kick out two of the guitarists if you ever want to see even a dime. Moronic. The drummer is not built for touring and pre-diabetic. Expect a heart attack from the stage.

Pure noise here, we paid $750 for this press release

I see a lot of guitars here and exactly zero riffs.

This band is largely a bunch of Rich white suburban kids living off mommy and daddy. Where is that band Zulu and their 'end white hardcore' shirt. It applies here. This band is what we call right time, right place. Social media driven emo of the lost non binary generation. This may be the worst Long Island emo band of all time. You know no one in this band is getting canceled because none of them get laid and pay for a slew of only fan pages.

Photographer: yeah… we can we please hide that morbidly obese drummer of yours behind your singer big ego…. Yes like that perfect.

No way this album goes Gold so what's the point? >>> Still posing as someone else bashing what you said huh?

Time for Sanction, King Nine, Regulate & Hangman to hang it up.

^^^^^ Incest hardcore. I think each of those bands have at least a member that plays in everyone of them, someone f*cks someone's sister, aunt, brother of cousin and vitalos dad funded at least half of them.

^^^ More like none of them will ever sell out a 200 capacity room as a headliner unless they have Mindforce & a hype band from Cali support them.

Someone should start a band called Oyok.

metal and hardcore has fallen on the worst of times of times if this is being posted.

The singer killed off my character in pathfinder

A very cool person. Most often a hot male with extreme skills in everything. Often used as a compliment. Girl: "That guy is so hot and totally awesome, a real koyo!" Boy: "I wish I was a koyo like that guy."

Is that the singer of Front Porch Step

How can a band look ok in the promo photos but god awful ugly in the music vid. yikes