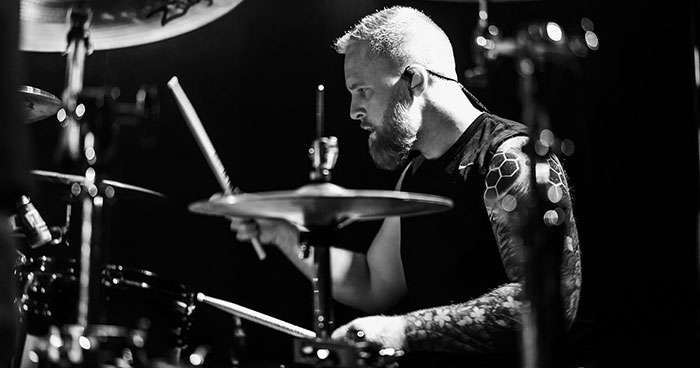 "After 16 years, I am pulling the curtains on NeO and moving on to new and different challenges with my life. Like everybody else on this planet, the last 2 years especially has been a shake up for myself and the directions I am now heading on. It has been an incredible ride being in this band from basically day 1. It was the first band I ever tried out for, after playing drums for about a year, and I am still thankful to this day the guys were patient with me and let me grow into the band. The band has definitely shaped the musician I have grown into to this day. I was always proud of not accepting invitations to join established touring bands, and pushed forward with NeO.

"I always said I would never travel overseas until music took me, as a personal accountability measure to keep me focused on my goals - I achieved that with these guys and very proud of what we have accomplished as a unit.

"I recorded drums for the new record back in March 2020, and of course will still keep my tracks for the record. It's had its setbacks, but I can assure you it is a damn strong record. I did more prep work and writing for that record than I have done for anything else, and I'm excited for everybody to hear the end result. Hopefully the guys will have news for you on that sometime soon.

"I will be continuing with music, and have in the last few months become quite busy with new projects, and my new band Black Lava. I will continue to play music and tour, nothing will change there. I'll be keeping my options open for any future projects/opportunities/touring that may come my way, but until then  my studio, my full time day job, and my bands will keep me pretty busy for now.

"We are all parting on good terms, I have a lifetime of memories with the boys, I will miss them dearly, and I am extremely grateful for all the friends and opportunities with music that have entered my life through NeO.  I wish nothing but success to the guys moving forward. Thanks guys for a hell of a ride, and thank you to everyone I have met through the band, all the crew, fans, bands, haters and the 100s of drummers I now call friends worldwide."

For their part, Ne Obliviscaris had the following to say:

"Dan has been an absolute rock behind the kit for this band for so many years, so many songs, so many tours...

"Dan has decided to move on to other things and say goodbye to his time in NeO, but he'll always be a huge part of how we arrived at this point here today and we are so grateful to have shared so many special moments together over the years.

"Please make sure you go check out and follow his new band Black Lava and follow Dan Presland official on social media to keep up to date with all his future projects.

"(For those already enquiring about auditions for the vacant drumming position, we'll be making announcements at a later date.)"