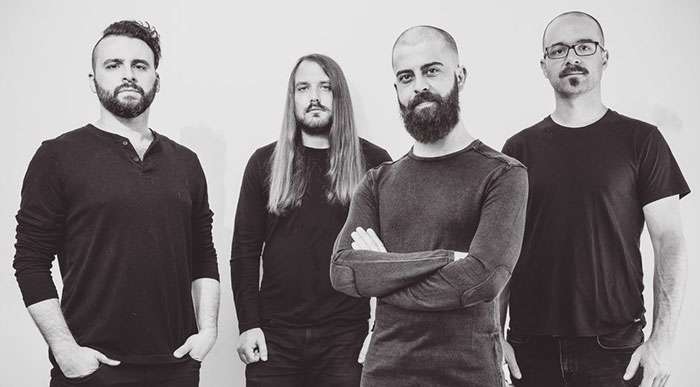 Five years on from the release of their sophomore album, Lunar, Without Waves have announced their return and their eagerly awaited third album - titled Comedian. The album brings together ten expansive tracks, charting the emotion-heavy few years that the Chicago-based band have experienced together. Alongside the album announcement, Without Waves have shared the lead single and gloriously fun accompanying music video, "Good Grief."

Comedian will be released via Prosthetic Records on March 18 and is available to pre-order. Watch the video for "Good Grief" below.

Speaking on the single release, the band comments: "Good Grief is a loose socio-political commentary on the endless stream of information we are all subjected to; the toxic soapbox journalism, the hyperbolic punditry and sensationalism...all for what? Someone in power can tweet something and it can shift global markets, cause geo-political uproar, which ultimately affects normal people at a micro level. Take the old adage made famous by Stan Lee: "With great power comes great responsibility." It seems as though many in power can't or won't grasp this simple pearl of wisdom, and we're all worse off for it."

Having been a band for over a decade, and grown together - personally and creatively - for over half of their lives, the members of Without Waves have an unspoken bond, a synergy that unites them and drives them forward. Despite the at-times difficult topics covered on the album, the band acknowledge that there is often humour to be found in human tragedy; comedy can soften hard truths which makes them easier to reckon with and process - hence the album title. Comedian is essentially an analogy for using art to disarm what troubles you.

Embracing the multiplicity of ways to interpret the label 'progressive', Without Waves have created an album that would nestle comfortably in the record collections of fans of both The Dillinger Escape Plan and Devin Townsend, Gojira and Porcupine Tree. Their dynamic, experimental take on heaviness is evocative, thought-provoking and unconventional. Comedian was self-produced alongside Rollin Weary, who also mixed the record, before it was mastered by Brad Boatright at Audiosiege in Portland, OR.

For a band that has always been sonically heavy, Without Waves have added an additional layer of intensity with Comedian, that adds emotional weight to what was already a crushing proposition.