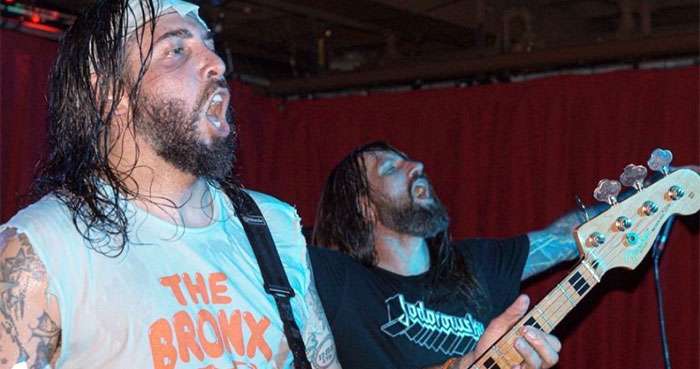 @m_t_graves
The war of words between Every Time I Die and vocalist Keith Buckley continues as bass player Steve Micciche has now seemingly responded to the lengthy statement issued by Buckley this morning with one of his own. Taking to Twitter to share his version of the past two months, Micciche had the following to say:

I know what has transpired online over the past month has been confusing, vague, sad, totally out of character, leaving people angry, etc. I know this, because Andy, Jordan, Goose, myself and every single person behind the scene to make ETID go have felt those with you…

This band of 20 plus years of hard work, dedication, doing it our own way and with pride was tore down and ripped away in a matter of 4 or so tweets at wee hours of the morning in December of 2021. A band that we were so immensely proud of was reduced to TMZ/soap opera ashes in quite possibly the saddest demise of anything I've ever seen in my life, and we were a part of it. While I've been cringing at even the thought of doing this, I am now choosing to stick up for my friends, coworkers, anyone that's ever had a hand in ETID, and myself…

Our MGR retired in June. There was a seamless transition to a new MGR who was formerly our day to day point woman. She was incredible at her job so we were all comfortable with her and all 5 agreed to bring her on board. Privately, and behind our backs, Keith made a call to her saying he wanted Jordan out of the band. Immediately, an internal rift started. We canceled a live stream event, canceled a video shoot. The band paid for therapy for them. After ONE session, ONE, Keith had convinced the band that he could continue on and keep the band rolling after numerous talks about every member being more open, more transparent, we were feeling good about the future. We play a Covid comeback show in Buffalo. We find out from MGMT that Keith was trying to cancel the show even after every single safety precaution was humanly done so in full transparency, we got on a group call and asked Keith about it. He immediately called our MGR a liar, she started crying, he hung up the phone. Hung up. No accountability. We awkwardly sweep it under the rug and head into Furnace Fest and the Radical release.

The tour started off seemingly well. Until we got 1 week into tour in Omaha. After the set, Jordan walked back on stage after kids were shouting for another song. While backstage I go “are we doing this?”, Keith replied “that's your boy”. No, that's all our boy.

Right there was when I sensed this therapy session did not work. It immediately soured the rest of the tour moving forward for us. This is the band. These 5 guys. Everyone here are boys. Well, whatever we have a tour to do. We march on.

We were in full support of Keith traveling separate. We supported him in ways that I won't disclose, but he knows, he had full support of the band. There was no crazy drinking on this tour. I don't drink on tour. Goose doesn't, Andy doesn't. Jordan maybe 2 & 2 more for stage props. Keith was showing up to shows 10 minutes, sometimes 5 minutes before set time, and while I mostly wasn't paying attention due to my own pre show rituals and warm ups, it was casting a reasonable concern as to “what if the RV breaks down?” I have zero clue what Keith claims to have heard. But there was zero conversation, I mean, zero, about replacing Keith as the singer of ETID. Keith knows that cause I've told him that personally and via text, NUMEROUS times recently and over the years. He stormed off the stage after the show and refused to talk to Andy & myself. We waited. We waited longer. His girlfriend told us “I've been trying to tell him to talk to you guys”. Well, we waited longer as she went to get him. Never showed up. We sat there for over an hour waiting. I could tell Andy was defeated and deflated. We all were.
advertisement
The next morning as we woke up on Dec 3rd, we found out, via twitter, that Keith was leaving the tour. He never told us, never told MGMT. That's how we found out. Keith sited mental health reasons. So, in full support of Keith like we have always done, we addressed mental health in a statement, wished him well, and hoped to play TTS with him. Also, keeping in line with band history, when Keith has left a tour for whatever reason, we have ALWAYS continued on. With whatever friend we could beg at the time to fulfill any obligations we had. This time though we didn't even feel it was right to have someone fill in. So, to not disappoint paying ticket holders, the 4 of us agreed to continue on and just have kids come up and sing their favorite songs. Does it suck not having Keith there, absolutely! But what are we supposed to do? We found out via twitter he was leaving and wouldn't talk to us. So we posted that we were gonna do those 3 shows. Well, Keith somehow took that as a personal attack. What followed after that is still shocking to me and quite frankly will never understand it.

That statement was not proof of anything. It's what we've always done. Whatever he claimed to hear did not warrant in any way shape or form the slander of a fellow band member publicly nor did it warrant tarnishing the legacy of the band we were all in for over 2 decades. We, along with MGMT, the label, booking agent were in absolute shock. While scrambling to decide what to do next, we got word that the ‘68 tested positive for covid. So we made the decision to cancel the final 3 shows and contemplate the future of TTS.

On Saturday, Dec 4th, I called Keith. He didn't answer. So I texted him. He did respond to the text with a “if you have anything to say, say it here”. He also said “I don't trust either of you” when referring to Andy and I. Wasn't sure what we did but I looped Andy in on the text. Keith led off by saying “i'm not talking, i'm reading”. The main bullet points of this convo are as follows:

His main concern was why Andy's g/f unfollowed him on social media and why I laughed at something Jordan said in our dressing room that I don't even remember happening.

He threatened to walk 3 times, let me repeat, 3 times during this convo. He gave Andy and myself an ultimatum to choose him or Jordan. What?? Friends don't give friends ultimatums. He accused Andy and I of allowing physical and emotional abuse towards him via Jordan for 20 years. Do you think for a second that Andy and myself would ever allow or stand for anything like that? We're just waiting daily for a healthy dose of abuse to happen and let it slide? Never. Keith said the outcome of TTS happening was in OUR hands! What? You put us here.
advertisement
We came to the agreement to play the Xmas shows for the kids and the bands that traveled. But I'm order to do that, we had to meet the demands of Keith: separate dressing room on the other side of the building, a statement saying we apologized although all we originally did was address mental health which is verbatim what Keith tweeted in regards to him leaving the tour, demanded no alcohol in the rest of the bands dressing room even though no one was drinking and Jordan barely was, etc. We play the shows with zero access to Keith. Not one word said.

During that week between the tour and TTS, Keith was accusing Jordan of making fake set lists to hand out to him (never happened), he was blocking us from his social media (only to unblock me on Dec 6th while I was at a Bills game to comment “noted”) super cryptic and when I texted him to ask him what that meant, he didn't reply. Look, he refused to take the stage any further with Jordan in the band. He dragged the band name over hot coals online for the public to see. Accusing Jordan of wild shit. Leaked private text messages between Jordan and himself in only what I could imagine was some attempt to make Jordan look bad and didn't at all. He threw that legal up some mic drop/dunk attempt that tried to make himself look like he was fired when his own lawyer even knows that's not the case and you can see for yourself it's not. Look, at some point, you have to take your own life back. There were completely irrational tweets sent out ruining the thing that EVERYONE in the band built. We read between the lines enough to come to the conclusion that Keith could and would continue without us.

So guess what? I know some people don't want the fairy tail ruined, but the band is a business. And the 4 of us rightfully so, were setting boundaries and protecting our interests. That's it. That's all that is. And for this to have even gotten to where it is is soooo sad. I have nothing to lose band wise by posting this other than to stick up for a band member undeservingly slandered and ourselves. The band was already ripped away. I hope everyone understands how much this hurts every single one of us. Our manager QUIT management completely because of this. Take a guess why.

I absolutely appreciate each and every one of you, sincerely from the bottom of my heart, and i will always remember these experiences. I ultimately wish Keith the best and truly hope he does find inner peace and no hate in his heart like he constantly says he has. Enjoy the music that's out there, and hopefully myself and the rest of the guys that choose to make music with me will see you soon.