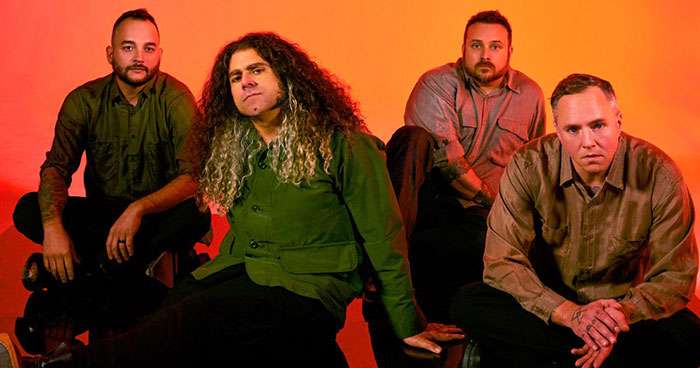 Coheed and Cambria has announced details of their widely anticipated new album, Vaxis II: A Window of the Waking Mind. The ambitious thirteen track epic was produced by the band's own Claudio Sanchez and Zakk Cervini, and will be released worldwide on May 27th.

Today the band has launched pre-orders for the album on DSPs and for the collection's deeply immersive Vaxis II: A Window of the Waking Mind Limited Edition Deluxe Box Set.

Coheed and Cambria will celebrate the forthcoming LP with "The Great Destroyer Tour," a U.S. headline run which will feature support from special guests Sheer Mag. The coast-to-coast trek is set to get underway on February 16th with a sold out show at the legendary Pappy & Harriet's in Pioneertown, CA and will continue through mid-March giving audiences an opportunity to see the band live in intimate clubs across the U.S. For tickets and more information on the "The Great Destroyer Tour," visit www.coheedandcambria.com.

For the last 20 years, Coheed and Cambria have continuously broken the mold of what a rock band can be, forging their own path and building a universe around their music unlike any other. Whether it is in the way their genre-spanning approach to songwriting has allowed them to bridge worlds without being contained to one, or the multifaceted story arc of their albums and comic book series which mark the longest running concept story in music, Coheed and Cambria have consistently shaped new standards, never conformed. Comprised of Claudio Sanchez (Vocals / Guitar), Travis Stever (Guitar), Josh Eppard (Drums) and Zach Cooper (Bass) the band has gripped listeners and press around the globe with their visionary compositions and conceptual mastery. In 2018, Coheed and Cambria made a stunning debut with their album Vaxis I: The Unheavenly Creatures, which debuted at #1 on Billboard's "Hard Rock Albums" chart, #6 current sales and Top 15 on the "Billboard 200" chart.

Vaxis II: A Window of the Waking Mind track listing:

This tickles my pickle. - Owner of Tanner's Pickles

There is no pickle business to sell.

An album about vaccination? No thank you. Might as well turn on the TV and rock out to CNN for free.

who's the curly haired chick?

Pull the trigger and the nightmare stops

You cucks would all do well to open your mind about vaxes.

Oh so "Coheed" think vaccination is "tyrannical." As they submit their passports & for some countries proof of vaccinations to tour overseas, put on their seatbelts, etc. F uck these anti-vax clown losers.

Vaxis is the name of Nea and Nostrand's child, of whom little is yet known. His tale will be told across five Coheed & Cambria albums, the first of which was 2018's Vaxis - Act I: The Unheavenly Creatures - Seeing the pro vax & anti vax crowd loose their minds over a fictional character thinking is about the C19 vaccine is hilarious.

Vaxxtard 2: myocarditis Boogaloo. Really though who would get vaxxed at this point the virus is 2 years old and omicron is the common cold. The only people vaxxing at this point are trying to compensate for their vapid existence with no accomplishments to purpose. The only thing they can be good at is boot licking.

"with no accomplishments to purpose" Lol. English much, mouthbreather? BTW: Your break is over at Jiffy Lube, get back to work.

This band was awesome when the rhythm section was junkies.

I Hope "A Disappearing Act" is about robbing a Walgreens

I believe we're on vaxxis 6 or 7 now yeah? Stop killing people you fascist🙄

Vaxx up or die!

Vaxis is the name of Nea and Nostrand's child, of whom little is yet known. His tale will be told across five Coheed & Cambria albums, the first of which was 2018's Vaxis - Act I: The Unheavenly Creatures oh, so this is f*cking retarded? why do dumb losers think their dumb, bland "concepts"ate interesting? like i give a f*ck about some made up person with a dumb f*cking name with parents that also have dumb f*cking names. what does vaxxiss even do?

Incel Rogan worshippers who watch "Idiocracy" and think it's about anyone other than the reflection they see in the mirrored surface of a deathcore CD they cut their Oxy up on are triggered.

Claudie and the Chancy Meatballs

I am so stoked. I am booked to get my 12th booster. Yeah boys. Get vaxxed for someone else's health, not your own.

shits been tired for 20 years already

just make a fake card like most people are doing and be done with it, you really think the gorilla working the door in Billings is running that shit through a database?

All I can think of is Danny Tanner got the Vaxis.

This band jumped the shark after the bass player robbed a pharmacy for drugs while taking a taxi back to the show. Lololol

Even Tanner here, would you like to make more money? sure we all do. now you can by sending 100 bitcoin to coedfeminist@gmail.com. Get in on the ground floor of the best pickles in baltimore. Pay no mind to the defunct social media sites and google saying our business is permanently closed. Just let me shoot up, i mean shoot up our profits in a matter of weeks.

Imagine when this dude goes bald