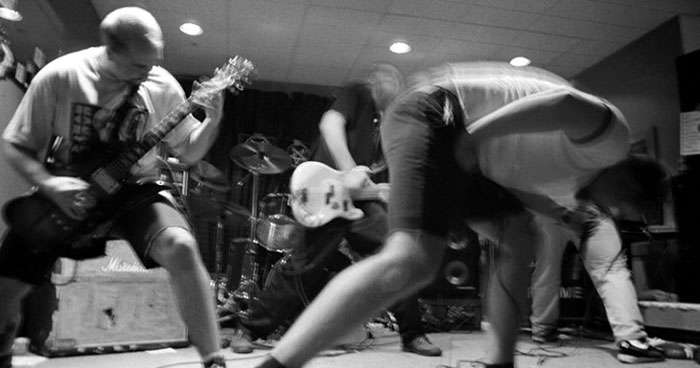 This authorized documentary chronicles the short-lived career of Deadguy and their seminal hardcore album Fixation On A Coworker. Deadguy formed in the early 1990s, uniting members of Lifetime, Rorschach, No Escape, and more. Released in November of 1995 through Victory Records, the album hit like a dull axe blade to the face; an artistic, cynical, creepy, scathing, and unpredictable jolt to the hardcore scene, which instantly became a cult classic of the era. To this day, Fixation On A Coworker remains one of the most influential and standout records of the 1990s metallic hardcore scene as well as with noise rock circuits, having challenged the "norms" of the scene.

Killing Music is a gritty and captivating documentary that retraces Deadguy's every move, from the band's formation and early days, into their two albums and relentless touring, through their challenges and the disputes within its ranks which saw the band emerge with a new lineup before their first album would even see release, and eventual disintegration. Featuring never before seen pictures and videos, unearthed live audio recordings, interviews with every member of the band's multiple lineups and a wide cast of industry peers, and much more, Killing Music also sees the Fixation On A Coworker lineup reuniting for the first time in more than two decades on camera, as the band prepares to play together for the first time since 1995.

Presented by Cinepunx, Killing Music will premiere this Friday, September 24th at Underground Arts in Philadelphia. The entire film will be played in conjunction with a Broken Goblet tapping event for Deadguy's Makeshift Atomsmasher Beer, followed by a question-and-answer interrogation of the members of the band and the filmmakers.