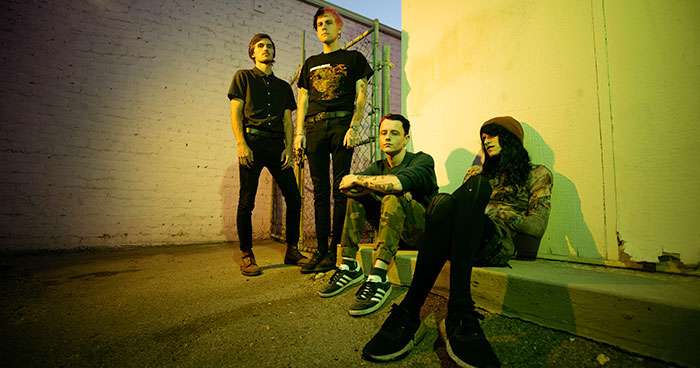 SeeYouSpaceCowboy announces their highly anticipated new album The Romance Of Affliction set for release on November 5, 2021 via Pure Noise Records. The announcement comes with the release of their latest single "Misinterpreting Constellations," which is out now.

Speaking on their latest single, "Misinterpreting Constellations," Connie Sgarbossa states, "...it's a look back at actions you viewed as a romantic situation, and still do to an extent, but being able to realise that ‘love at all cost' maybe wasn't the healthiest thing for yourself, them or others."

The second full-length studio album from San Diego's self proclaimed "Sasscore" outfit expands on the darker elements that weave together the band's DNA. Produced by Knocked Loose guitarist Isaac Hale, The Romance Of Affliction stands as the quintessential SeeYouSpaceCowboy record. It's violent and vicious, harrowing but oddly comforting, bleak yet beautiful. It's a complex and compelling mix of genres that defies categorisation and which truly places the band in a world of their own.

Lyrically it examines struggling with adversity while trying to find beauty within that fight and the hope of triumph. It's the sound of total collapse, of darkness closing in, of trying to escape – through drugs, through death, through whatever means necessary – from the horrors of existence. Two weeks after the band finished recording, frontwoman Connie Sgarbossa nearly died from a drug overdose. It was, she admits, a kind of physical manifestation of everything the album's 13 songs are about.

"Writing music is cathartic to me," she says. "Getting things on paper is the only way I know how to deal with stuff. So to have that happen two weeks later almost backed up why I wrote the album – it was a self-fulfilling prophecy. It reinforced that I wrote the album that I needed to write."

Reflecting on the themes of the new album Connie comments, "The album is a reflection on the last couple of years of our lives; It serves as a tongue in cheek, but genuine look at what it means to struggle through adversity while trying to find some beauty in it all... It's about making art about parts of our lives that are ugly and how that seems to resonate the most with people." Sgarbossa expands by adding "...what it means to be in love with someone as well as the substances that are killing you both, what it means to use sex as a way to try to feel content and loved but without a true connection that instead makes you feel more isolated. The poetic nature of writing songs about addiction only to almost die of an overdose a few weeks later. It's a pretty coat of paint on a crumbling structure."

That brutal, unflinching honesty isn't just conveyed with Connie's intensely personal lyrics, but through the intensely visceral songs that bring those raw emotions to life. Indeed, the music is a physical manifestation of the existential tug of war played out in these songs – the push and pull between existence and non-existence, the torment of loss, the rush and exhilaration and self-destructive devastation of addiction – and everything in-between. Whether the blisteringly erratic tumult of opener "Life As A Soap Opera Plot, 26 Years Running" – which features Every Time I Die's Keith Buckley – or the confused duality of "With Arms That Bind And Lips That Lock," the wild, craven and careening existential torment of "Ouroboros As An Overused Metaphor" or the desperate, suppurating urgency of "Melodrama Between Two Entirely Bored Individuals," each song its own unpredictable, chaotic journey through darkness and pain, all linked together by the universe they're part of.

The record is packed with tales of love, addiction, obsession and redemption and is a perfect brew of heavy, chaotic and confrontational.

The Romance Of Affliction track listing:

01. Life As A Soap Opera Plot, 26 Years Running (ft. Keith Buckley)
02. Misinterpreting Constellations
03. The End To A Brief Moment of Lasting Intimacy
04. Sharpen What You Can (ft. SHAOLIN G)
05. With Arms That Bind and Lips That Lock
06. Losing Sight Of The Exit…
07. ...And My Faded Reflection In Your Eyes
08. Intersecting Storylines To The Same Tragedy (ft. Aaron Gillespie)
09. Ouroboros As An Overused Metaphor
10. Anything To Take Me Anywhere But Here
11. The Peace in Disillusion
12. Melodrama Between Two Entirely Bored Individuals
13. The Romance Of Affliction (ft. If I Die First)