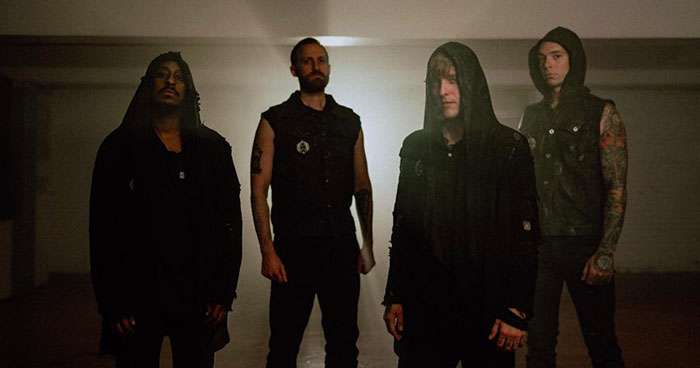 Enterprise Earth is among the most celebrated death metal bands of the modern era. The group, "crawls from the shadows of Washington, throws Patient Ø at us, and death metal is reborn," wrote Shockwave Magazine of the band's 2015 debut. A critic for Metal Nexus declared 2017's Embodiment, "the heaviest album I have ever heard," while the band's third full-length slab, Luciferous, joined Loudwire's 50 Best Metal Albums of 2019. "It never hurts to make an album that makes the majority of your peers look silly," declared Blabbermouth. "Your move, deathcore hordes."

Their move, indeed. Enterprise Earth reemerges in 2022 with their latest full-length The Chosen, a masterpiece of monstrous brutality and enveloping ambiance. It is the band's heaviest yet most diverse effort, with shifting attitude, vibe, and desperate aggression stitched throughout its songs. Brooding, thick with atmosphere, groove-driven, old-school death metal with modern flourishes, the music of Enterprise Earth switches gears from earth-shattering breakdowns to sickeningly slow sludge to blast furnace pummeling with seemingly effortless ease. Composition after composition is ominous, ambitious, lurching, and inviting, including "Where Dreams Are Broken," "The Failsafe Fallacy," "This Hell, My Home," "Sleep is for the Dead," "Temptress," and "He Exists."

Vocalist Dan Watson is on a mission of "me against the world," taking on personal struggle, isolation, self-doubt, and alienation like a man possessed, determined to persevere at all costs. It's a fight for personal survival, rendered with painstaking passion by a gargantuan unmistakable voice. The Chosen was engineered, produced, mixed, and mastered by guitarist Gabe Mangold (now the group's sole guitarist) save for the drums. Drummer Brandon Zackey tracked his relentlessly jaw-dropping and diverse drum performance with producer Jason Suecof (August Burns Red, Demon Hunter, Death Angel). Bassist Rob Saireh rounds out the Enterprise Earth lineup, bringing equally formidable power, dexterity, and groove.

"Where Dreams Are Broken" is the lead single off The Chosen, now playing at MetalSucks. Here the band picks up right where they left off with Luciferous and 2020's Foundation Of Bones EP writing aggressive and dynamic deathcore while incorporating unique progressive elements and stellar technicality. The track's grinding groove and hook-laden chorus are perfect examples of their compositional growth while retaining their brutal staple sound.

Offers the band, "We're tremendously excited to finally release 'Where Dreams Are Broken' as the first single from our coming album The Chosen. We felt this would be the right song to start off with as it features a few new elements that we've added to our songwriting in addition to bringing everything you would normally expect from us at 110%. We've put our heart and soul into this record and we hope you enjoy it. There is much, much more to come."

The Chosen will be released on CD, LP, and digitally.