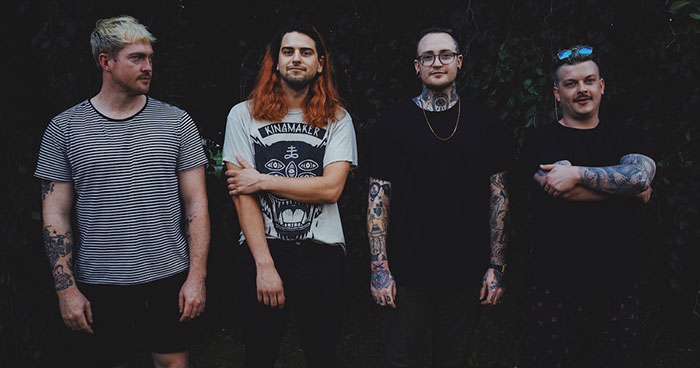 Today, experimental hardcore group MouthBreather have announced their signing to Good Fight Music and the subsequent release of their new album, I’m Sorry Mr. Salesman. The album was recorded and produced by the band’s drummer Nick Cates, creating a production relationship that guaranteed nothing about their crushing sound was lost in translation. Chaotic, evil, and dedicated to eschewing genre expectations, MouthBreather is influenced as much by bands like Deftones, Primus, Tool, and Underoath as they are by more standard-issue punk and hardcore. The band places a heavy emphasis on visual art and creating a dynamic, menacing presence while still maintaining an aura of mystery.

"I was immediately impressed by the band upon first listen. The artwork grabbed me and then the music was just filled with a palpable rage and urgency. It just clicked with me right away. The guys have a great work ethic and a great vision that I know Good Fight can help actualize. Gonna be a fun one.” - Carl Severson (Good Fight Music)

Throughout the ten tracks of controlled chaos on I’m Sorry Mr. Salesman, the band is consistent in delivering a performance that is shockingly different from what you might expect from a punk/hardcore group. “Cotton Shot” oscillates wildly between chaotic nu-metal and downtempo beatdown, while “Burnout” incorporates a deceptively saccharine clean vocal into one of the darkest tunes on the release.

Titular track “I’m Sorry Mr. Salesman” opens with an unbridled (and slightly unhinged) performance from drummer Nick Cates that crescendos into a furor before dissipating into an almost ethereal soundscape, albeit one that is enveloped in a thick cloud of pure evil. The band manages to pack each of the songs on the release with so many absolutely skull-crushing moments that listening to the entire album front to back is not for the faint of heart -  and that is very much by design. MouthBreather is a band that only truly sounds like themselves.