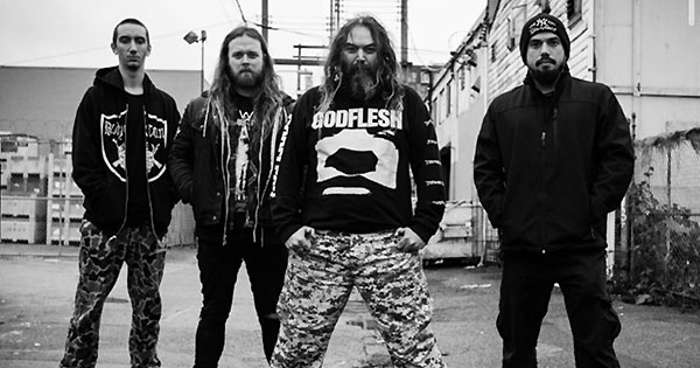 Several days ago it came to light that Soulfly guitarist Marc Rizzo had parted ways with the band after 18 years together. Soulfly frontman and founder Max Cavalera has now revealed that Rizzo was fired for "personal reasons."

Commenting on the matter during a new episode of his Internet video series "Max Trax," Cavalera had the following to say about Rizzo's departure:

"So right now, for the tribe, I wanna address something that is going on with Soulfly. Of course, it's about Marc Rizzo. He did not leave the band. We decided to part ways with him due to personal reasons. I wish Marc the best on his career. I wanna thank Marc for the 18 years with Soulfly. I'm very excited that we're bringing our friend Dino [Cazares] to play guitar for us on the next U.S. tour. The show must go on."

Marc didn't want to get vaxxed.

Rizzo was half the reason I'm a Soulfly fan. Guess we'll have to see what happens, because nobody can play and write lead over latin influenced metal like he could.

No vaccination, no job Welcome to the real world buddy, where nobody wants to sit next to a dirty virus carrier, and nobody wants to lose money because of your idiotic decisions.

You can still get delta variant with a vaccine moron. When has metal become a scene with a bunch of brainwashed pro government gays?

You have a 98.5% of living through this fake plague. That's also a 1.5% chance of death. The pandemic COVID virus kills people who are already sick. If you're healthy you're fine. The flu has a higher mortality rate. Let that sink in. Put your mask on! Lol

When did metal and hardcore scenes suddenly become anti-science and anti-knowledge? Punk, hardcore, metal has always been on the side of reason, against blind traditions.

"When did metal and hardcore scenes suddenly become anti-science and anti-knowledge? Punk, hardcore, metal has always been on the side of reason, against blind traditions." That's the good part of it. Unfortunately the other part is just hyper macho cave men drawn to violence. MASK GAY ME NO WEAR.

Modern day scene = Rage on behalf of the Machine. You can't be counterculture and mainstream government bull crap at the same time. They don't mesh. Countercultures anti-establishment. It always has been, it always will be. The modern-day scene has been co-opted by Twitter. It's fake. You think a piece of cloth is going to keep you from getting sick? Who's anti-science? We're not talking about n95 masks on clean shaven faces.

If Obesemax took a vaccine that's not FDA approved that's his problem. If you're vaccinated why would you care? I don't believe the virtue signaling garbage about Grandma. Take Grandma to the doctor and get her vaccinated if you're concerned. I'm not getting the corrupt governments juice injected directly into my body. It's not FDA approved so that means you can't sue anyone if it does something horrible to you 5 years from now. You can be a sheep, that's fine. I'm not a sheep.

Max Cavalera is not pro vaccine and mask. Max likes getting paid. He does what he's told. Max's PR rep controls what Max does and says. The guy wrote songs about government "scientific" propaganda back in the '80s and '90s. I don't think Max wrote Biotech as Godzilla but he certainly sang it live. Now all of a sudden folks think he supports government propaganda? Max Cavalera did a 180° turn? Nah, I don't think so. He's trying not to get cancelled by y'all. Hahaha.

Wow I'm convinced now that this is crap. Why listen to scientists and doctors when you can listen to dudes that make minimum wage in Lambgoat comments.

Y'all could just go read Rizzo's quote about the departure in a publication (Blabbermouth) that actually fished for the information rather than just holding eachother's dicks in your hands anonymously in the lg comment section.

Will you all shut the hell up about vaccinations, no one cares you bunch of f*cking zealots. Marc already divulged the reason he and Soulfly parted ways on blabbermouth.

A shitty band fronted by a fat old dreadlocked man who used to be cool fires rad guitarist.

I'm not sure if Anti - Vaxxers realize how dumb everyone from all walks of life think they are? You are being mocked and laughed at everyday by everybody. There is no conspiracy. You aren't going to turn into a mutant 5 years from now. 99% of Americans who have died from Covid were unvaccinated. Yes you can still get Covid after the vaccine. No one ever denied this or tried to hide it. The symptoms are way less severe and chance of death significantly lowered. You will get vaxxed trust me whether you like it or not. All your co-workers have to do is gather together and approach your manager or owner and say you make them uncomfortable, and they are scared of being exposed. Your employment = done. Stop being a stooge and get the vax already (unless you have a legit medical reason)

Lol @ all these right-wingers calling liberals "the left." There's not a mainstream leftist movement in the US, you're just so far-right that you think centrist liberals are "the left." Read a book besides The Turner Diaries ffs

"Wow I'm convinced now that this is crap. Why listen to scientists and doctors when you can listen to dudes that make minimum wage in Lambgoat comments." Because doctors and scientists are lying charlatans that don't care about your well being, they only do it for profit? The same people that think pumping your body full of radiation is the only way to beat cancer? The same people that keep you on prescriptions instead of actually fixing the problem? Yes, we should totally trust these guys. Google "Tuskegee experiment" for more proof.

Hmmm and our parents who are drs?

I doubt this about the Vax. I believe it had more to do with the fact that Marc wasn't getting proper writing credits for his work with Soulfly.

My dad is a doctor and I'm sitting on his lap right now and he said "Where did all the penis and vagina smell talk go?"