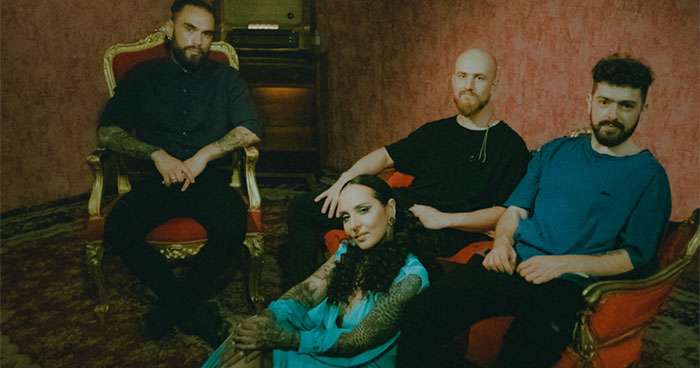 The announcement of the brand new Jinjer record, Wallflowers, out August 27 via Napalm Records, has not only caused immediate ripples around the world and delighted international reviewers and fans alike, but the band’s first single, “Vortex,” has already gained 2.5 million cross-platform streams/views in no time.

Continuing their unstoppable way to the top, the band has just released their head-splitting second single “Mediator” and a brand-new crushing music video. The second track cut from the new album demonstrates once again that their unique sonic vision combined with visual attitude is more than peerless. Frenetic drumming combined with technically adept, fast firing bass and guitar attacks, merging with the unmatched mix of Tatiana Shmayluk’s clear vocals, pungent rap-like passages and ferocious growling. The track’s high-quality audiovisual bombardment draws the viewer into the spell of the progressive spectacle and constructs the visual antithesis of the postmodern utopia thematized within the track.

Jinjer on the tone of the new single: “With years getting older, we often realize that the world around us is far from what we expected it to be. Through the eyes of a kid everything seemed way more colorful, better and optimistic, didn't it? When did it all turn wrong? When did it all turn so gray? Is this really the world's fault? Or it is only about us chasing the wrong goals... the wrong careers, ambitions and achievements, rather than embracing one important truth...

"Rephrasing John Lennon, if one chases something else other than happiness, then they didn't understand life at all."