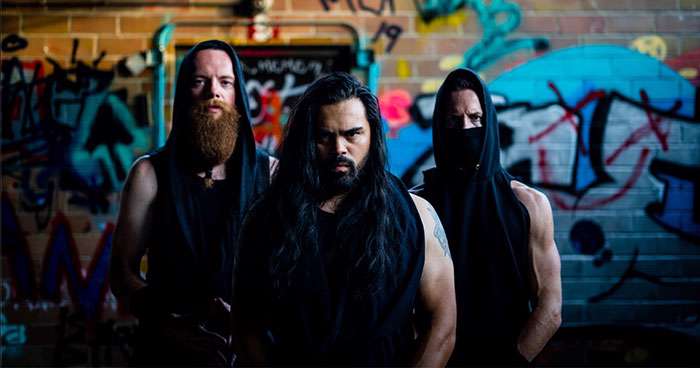 Minneapolis, MN based technical death metal trio Reaping Asmodeia have announced their new album, Darkened Infinity, due for release via Prosthetic Records on October 15. Darkened Infinity is the group’s third full length release and sees the band weave together rhythmically complex and acerbic songwriting with a conceptual story of transcendence, consciousness and humanity’s ongoing struggle with the psychological self. Alongside the album announcement, Reaping Asmodeia have also shared lead single "False Awakening" and its accompanying music video.

Speaking on the album announcement, the band comments: "It seems surreal at this point to finally be sharing our new album with all of you, but today we begin to do just that. We feel that False Awakening is a perfect way to begin to illustrate what we have constructed with Darkened Infinity."

On "False Awakening" and the accompanying music video, the band add: "The darkness and intensity in this song and video bears a reflection of how vile our own actions can get lost in cognitive distortion, a theme and tone present throughout the album. A false awakening is an out of body experience that happens when you wake up from a dream only to realize that you're still sleeping, superseding with a new perception and path in consciousness that takes shape when you are able to step outside of yourself."

Produced and engineered by the band themselves in Minneapolis before being mixed and mastered by Zack Ohren (Machine Head, All Shall Perish, Carnifex) at Castle Ultimate and Sharkbite Studios, Darkened Infinity’s intricate lead melodies unfurl with a menacing clarity when set against the album’s more abrasive tones.

Darkened Infinity’s concept begins steeped in tragedy as the album’s protagonist loses his family at the hands of humanity’s destructive force, with his own life hanging in the balance. As the tale unfolds, Lane’s lyrics thread together a story of immortality, malevolent entities and realms of dream logic - all the while exploring humankind’s inherent duality. Darkened Infinity’s thematic quest for transcendence is adroitly tied together in the opening and closing moments, suggesting enlightenment is not something to be obtained, but merely ‘the consequence of being’.

In the four years since their 2017 effort, Impuritize, Reaping Asmodeia have relentlessly pursued the U.S. live circuit, playing shows alongside the likes of Slaughter To Prevail, Rivers of Nihil, The Faceless and many more - refining their craft with a perseverance and determination akin to few others. Discontent with resting on their laurels, Reaping Asmodeia in 2021 are a far more seasoned beast, ready and willing to obliterate all notions of time mellowing their appetite and musical ambitions.