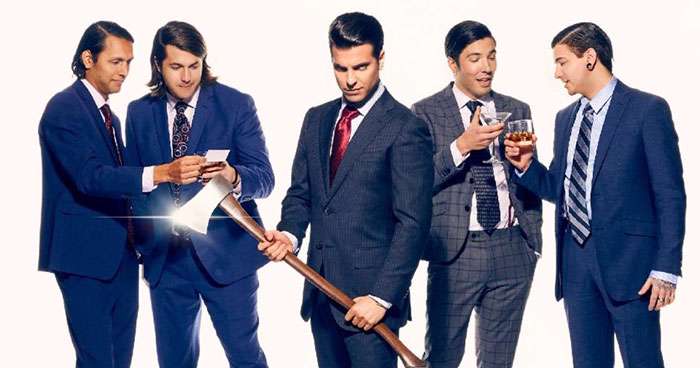 The first single to be unleashed from the album is "Hip To Be Scared," featuring Jacoby Shaddix of Papa Roach. The accompanying music video was premiered at the fan event last night and pays homage to the landmark movie based on the Bret Easton Ellis novel 'American Psycho', centered around psychotic investment banker, Patrick Bateman. "Hip To Be Scared" mixes the soaring choruses, clever lyricism, heavy riffs and Broadway-like theatrics that are as much 'Hamilton' as they are horror. The song also tips its hat to an ‘80s pop classic beloved by the murderous protagonist. Watch the video here:

Speaking on his band's newly announced album, Ice Nine Kills frontman and driving creative force, Spencer Charnas shared, “True to horror franchise tradition, there is always a sequel…”The Silver Scream 2: Welcome To Horrorwood” follows in the bloody footsteps of its predecessor, paying tribute to 13 more of the most gruesome tales to ever grace the silver screen. In this latest INK offering, the last album and video series is portrayed as a work of fiction. The new story line thrusts the band into a brutal “real world” slaying. The only traces of the crime are 13 songs left behind by the suspected killer. We can’t wait to share this next chapter with you, and to welcome you to the sinister state of mind that will soon be known the world over as, 'Horrorwood'.

"The first stop on the tour is 1980’s New York City’s 'greed is good' scene, where a certain hot shot investment banker has a rather violent dirty secret…”

A sequel of franchise proportions to the No. 1 Billboard Hard Rock Album The Silver Scream, The Silver Scream 2: Welcome to Horrorwood doubles down in pursuit of the anthemic band’s cinematic muse.

Decadent, devious, and fiercely insane, with sardonic wit to spare, Ice Nine Kills celebrate pop culture’s darkest edges, mining a cinephile library’s worth of b-movie schlock and iconic horror on Welcome to Horrorwood: The Silver Scream 2 and its prequel, The Silver Scream. The creative marriage made in hell of music and fiction began in earnest with the Boston-based band’s Top 5 Hard Rock album, Every Trick in the Book, which brought the previous three records’ themes to new levels with literary-immersed tracks.