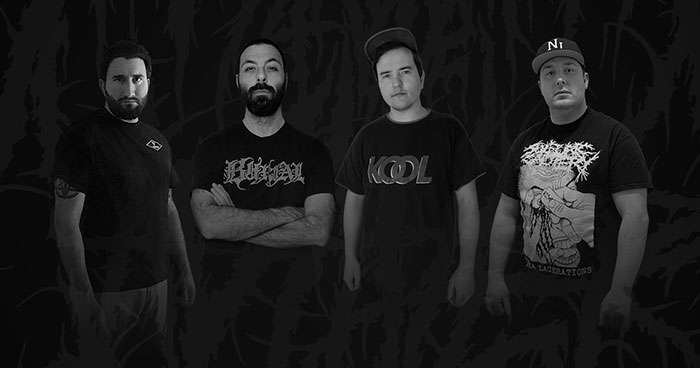 New Jersey death metal outfit Waking The Cadaver have returned with new single (and lyric video) "Threaten Physical Force" and announced the release of forthcoming album, Authority Through Intimidation, which is slated to arrive on October 22 through Unique Leader Records.

Guitarist Mike Mayo comments on the new album: "I believe Authority Through Intimidation is the definitive Waking the Cadaver album. Our mission statement for writing it was slamming gore groove. That’s been our slogan since the beginning and I think this collection of songs exemplifies its meaning more than any of our previous albums. We really wanted level up the technicality and song writing of Real-Life Death, while also having more nods to our first album Perverse Recollections of a Necromangler. I think we succeeded in doing just that. Listeners will be able to hear our love for bands like Dying Fetus, Last Days of Humanity, and Disgorge, as well as our love for early Hatebreed and All Out War.”

The new outing was produced by AJ Viana (Cognitive, Through the Eyes of the Dead).

Vocalist Don Campan comments: "I am extremely proud of Authority Through Intimidation for the intensely disgusting brutal vibe it has casted out into the Universe and beyond. Slamming gore groove has been summoned by its worldwide fans and they will not be let down. This album has all of our infamous alien guttural overlord vocal styles and raw signature slam dunks, with wicked fresh ferocious shredding attacks delivered from a musical-masterminded line up. The Kingpins of Death are stoked and proud to have the one and only next level blasting machine Lord Marco on drums giving this new material a cutting edge injection."