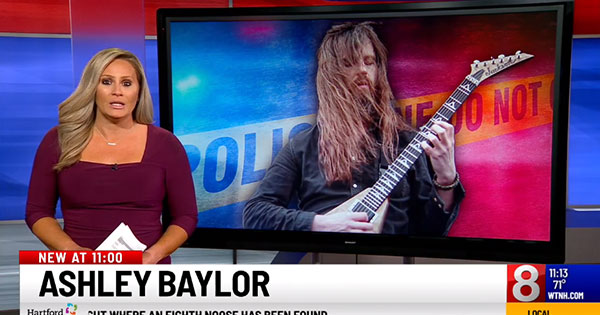 In October 2018, All That Remains guitarist Oli Herbert was found dead amid suspicious circumstances outside his Connecticut home at the age of 44. During the following year, police investigated the matter, a 'Justice For Oli Herbert' billboard went up, and various individuals attempted to find out exactly what happened to Herbert. Two and a half years later, however, it seems that we're no closer to the truth. His death has neither been ruled an accident, nor has a prime suspect been identified, yet state police still deem the matter to be an "active investigation." As such, Connecticut news outlet WTNH and reporter Ashley Baylor put together a seven-minute segment about Herbert and his death that aired last night (May 26). Among those to appear in the piece are Herbert's sister, Cynthia LeFave, and All That Remains members Phil Labonte and Mike Martin. Notably, Herbert's wife, Elizabeth, whom many believe to know more about his death than she's divulged, declined to participate. You can watch the entire segment below or read the story here. If you or anyone you know has information pertinent to the case, please contact Public Information at 860-685-8230.

Related: Oli Herbert, All That Remains