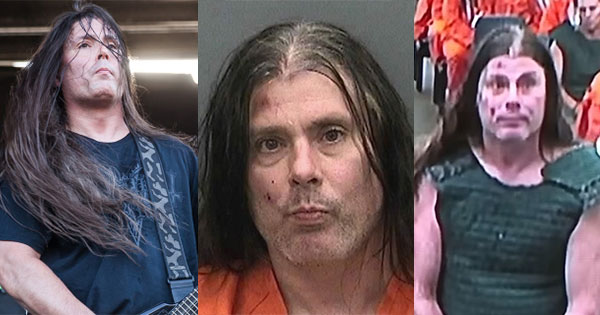 Former Cannibal Corpse guitarist Pat O'Brien has finally been sentenced in connection with his 2018 arrest for burglary and assault. According to Blabbermouth, on March 16 O'Brien was sentenced to time served and five years probation and ordered to pay nearly $24,000 in restitution. Moreover, O'Brien was ordered to abstain from alcohol consumption and drug use and will receive regular drug and alcohol screenings. He must also contribute 150 hours of community service. The original incident took place in December 18 when O'Brien burglarized a neighbor's home while his own home burned, and later charged at responding police officers with a knife. It soon came to light that O'Brien had a large cache of weaponry and ammunition at his residence and appeared to have some sort of mental breakdown before the incident. After serving as Cannibal Corpse's lead guitarist for more than two decades, O'Brien quietly exited the band and was officially replaced by Erik Rutan earlier this year.

Like Moths To Flame fire bassist Aaron Evans, "he has abused the platform he was given"
Against Me!’s Laura Jane Grace and Life of Agony’s Mina Caputo get heated over social media post
Andy Williams currently not involved in Ex-ETID members band
Pantera removed from Rock am Ring and Rock In The Park 2023
Glass Casket sign to Silent Pendulum, new album in the works after 17 years
more top news