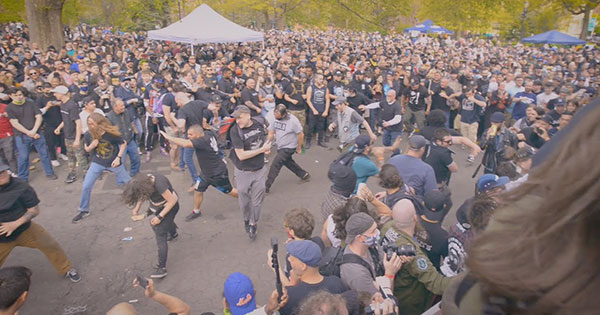 New York City Department of Parks & Recreation officials are reportedly investigating this past weekend's large hardcore show at Tompkins Square Park, estimated to have drawn roughly 2,500 attendees. As New York's COVID safety guidelines for social distancing and maximum attendance at outdoor events were seemingly ignored, Gothamist reports that the Parks Department is evaluating a possible permit violation. A department spokesperson told the publication, "This matter is actively being investigated as the permit application filed and agreement appear to have been violated—future permits are in jeopardy." The first major show to take place at the park since the pandemic started, the concert was organized by Black N' Blue Productions and featured Madball and Murphy's Law, among others. Presumably, the controversy could pose issues for a May 8 hardcore show scheduled to take place at Tompkins Square Park on May 8 with Antidote NYHC, Kings Never Die, and several other bands.