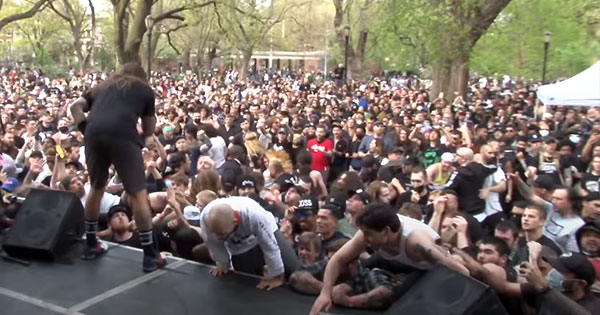 NYHC legends Madball headlined a concert yesterday, April 24 at Tompkins Square Park, one of the few sizable shows to take place in the United States since the coronavirus pandemic started more than a year ago. Featuring support from Murphy's Law, Bloodclot, and The Capturers, the concert was an all-ages, daytime event, with a portion of the proceeds slated to benefit the New York Firefighters Burn Center Foundation. Some 2,500 concertgoers were estimated to have been in attendance. Video footage of Madball performing their classic track "Set It Off" at the event can be viewed here: Addressing criticism for performing to so many, closely-spaced people during a pandemic, John Joseph (Bloodclot, ex-Cro-Mags) vocalist said, "To all those talking shit. For the last year in NYC there were protests - tens and thousands of people in the streets - some rioting and looting engaging in bias attacks - on 4/20 weed day - thousands filled Washington Square Park - sharing blunts and weed pipes. Nobody said shit. This was our PROTEST - OUR RALLY. People who didn't want to come - stayed away. Good - nobody missed their ass."