In the wake of the sexual misconduct and grooming allegations against Tyler Carter of Issues, one eye-opening social media comment concerning Carter and Miss Fortune vocalist Mikey Sawyer was sent our way. We subsequently reached out to Sawyer for clarification and hours later received a lengthy explanation, during which Sawyer accuses Carter of predatory behavior and coercion. Earlier today Carter issued an apology for his past mistakes and claims to have reached out to those "he may have hurt or affected." Sawyer says he's still waiting for an apology. The following is Sawyer's account of his purported relationship with Carter:
I first met Tyler Carter in 2011 when we worked on our song 'The Double Threat of Danger'. I found his fake Facebook called Hogarth Hughes and shot him over a message with the song and he loved it, so he agreed to be on the song for $800 (which I paid him). He was extremely difficult to work with and nit picked the process of clearing the song, until eventually I just had to release it for free because he would get the song taken down repeatedly by Rise Records. In reality, Tyler didn't think he sounded the best on the song compared to my vocals. After the song came out, Tyler was coming to Oklahoma City on a solo tour supporting Go Radio, which I went to finally meet with this dude who was an idol of mine. At this time I was 18, as was he. Before he agreed to meet with me and put me on the guest list, he sent me some extremely sexual texts messages and photos to see if I was willing to engage, to which I told him, "I'm not gay, it wouldn't even work like that for me I'm sorry bro :( I still really want to be friends though," so he still let me come to the show where I met him for the first time. I was enamored with Tyler, there's no doubt about it. From the first time we ever spoke on MySpace, he gave me advice that has served me throughout my career to this day. That makes what I'm about to tell you even more heart wrenching: At the show in Oklahoma City, we were standing amongst a group of people and bands when all the sudden Tyler starts texting me (standing in the same circle at the time) asking me if he can please take me to the van alone claiming, "I want to s-ck you off so bad lol." to which I was like, "Ah shit, I would man but there's too many people around." I literally had no other play at that moment, at that age, and under those circumstances, I just said what I thought would be cool at the time. After the show, Tyler rode separate from my friends and I back to the spot he was staying. I remember he gave me his card to grab us something from McDonald's and I was like, 'holy shit, he trusted me with his debit card, that's his name on it Derek Tyler Carter' I was like what the fuck. That night, I was able to get a selfie and dip out before things could progress much more, but I really felt like I had a special friendship with him then. 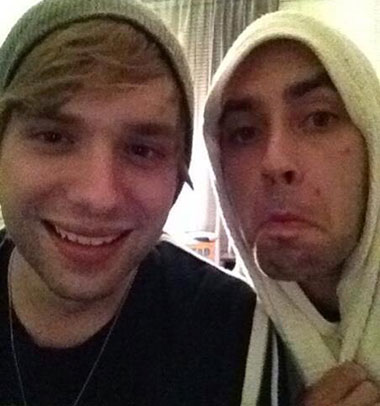