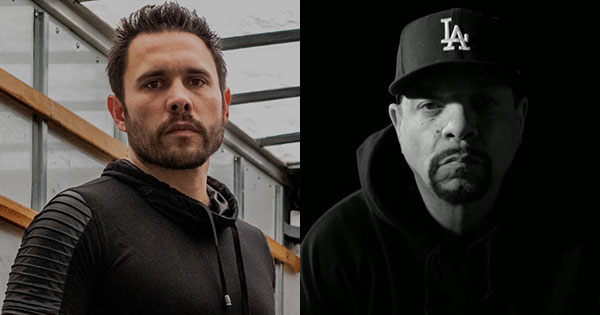 I'd rather not post updates about the Twitter antics of Trapt frontman Chris Taylor Brown, but some developments are too entertaining to ignore, so here we are. You may recall that amid Brown's Twitter dust-up with Power Trip vocalist Riley Gale last month, Brown challenged Gale to a charity boxing match. The Twitter sniping has continued in the interim, and has subsequently drawn in rapper and actor Ice-T along with NYHC veteran Danny Diablo (aka Lord Ezec). Arguing with another Twitter user over his band's streaming numbers, Ice-T and his group Body Count were brought up and Brown touted the supposedly superior streaming clout of Trapt versus Body Count. Ice-T got wind of the discussion and retweeted Trapt with, "keep talkin. We'll bump into each other one day." As is his tendency as of late, Brown used Twitter to lash out at Ice-T, prompting Diablo to join the fray. Diablo chastised Brown for insulting Ice-T and called Brown "a nobody singing for a wack band." Apparently still anxious to get his hands on Riley Gale, Brown then tweeted to Diablo that he would fight him if Gale would in turn fight him bare-knuckle.

Where the fuck is @DannyDiablo? I need to fight you in any way you want, cause I NEED to fight @RILEY_CYRUS bare knuckled! This is not a fucking joke!! This is man to man! If I need to get through Danny for the pleasure of cracking Riley's face, sanctioned, I will! I want this!!!

Brown subsequently claimed to have a "secret desire" to be an MMA fighter.

I actually have a secret desire to be an MMA fighter. The respect I have for those men, I cannot even express. I am training right now and I want @DannyDiablo and @RILEY_CYRUS as my first two opponents.....

Not content to fight just those two, Brown then returned his focus to Ice-T, challenging the icon to a bare-knuckle boxing match as well.

Twitter is not allowing to tweet this to you all... Every damn attempt! @FINALLEVEL ICE T! You ready to go bare knuckle?! You started ALL of this shit! I didn't want it to be like this! I never tweeted at you! But I will defend my honor! To the fucking death!

Predictably, Ice-T laughed off the challenge and pleaded for Brown's friends to schedule an intervention.

Who is this Troll? https://t.co/i21YRyDYto

Who ever this Trap guy is.. I think his friends should get him help. Do an intervention or something.. Real talk.

Dude actually wants to fight me now.... lol Too funny.

Stay tuned for our next installment of Stupid Shit the Trapt Guy Does on Twitter. (And if you want to check out our recent interview with Brown, scroll down.)