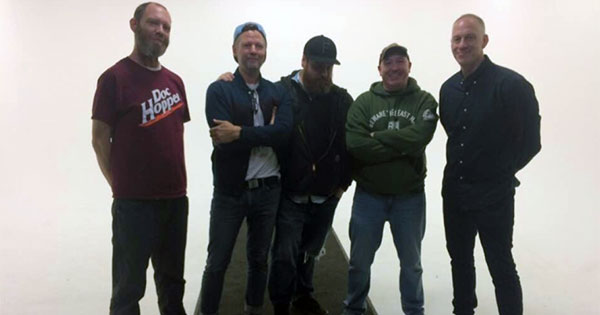 To coincide with the 25th anniversary of their landmark Fixation on a Co-Worker album, influential metal/hardcore band will release a new documentary this year. This may explain why the group reconvened in January for the first time in many years. Billed as "the definitive untold story of a genre-defining album from New Jersey's most dangerous band," the documentary is titled Killing Music and will arrive this fall. A trailer for the release can be found below. "In mid-2019, I met a guy named Bill Saunders, who is a producer/editor for a lot of cable shows and a big Deadguy fan," drummer Dave Rosenberg told Decibel. "Somehow he remembered that we were coming up on the 25th anniversary of Fixation. He suggested a documentary might be interesting and we started doing interviews in the fall of 2019 where it was basically me trying to wrangle the other guys. It took me a few weeks to convince [guitarist Chris] 'Crispy' [Corvino] but fortunately [vocalist] Tim Singer was on board immediately so that made it much easier to find [guitarist] Keith [Huckins]—he lives in waaay upstate New York—and Crispy knew where to find [bassist] Tim Naumann—teaching high school in New Jersey—and we had our first sit-down in 20+ years just a few months ago. In the meantime, we've been compiling photos, footage and interviews, which has been entertaining." Amid their discussion with Decibel, Deadguy also revealed their desire to play live again: "We want to play a few shows in the U.S. and then get over to play in Japan."