Hatebreed to release new album in the spring 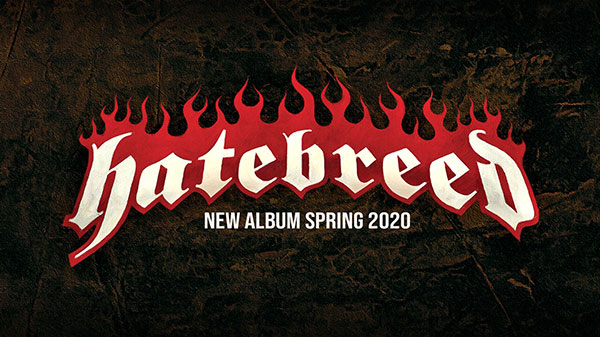 Earlier this year, Hatebreed frontman Jamey Jasta said the band would spend the latter portion of 2019 writing and recording their next album and follow-up to The Concrete Confessional (2016). It looks as though Hatebreed did just that, as the band has confirmed a spring 2020 release by issuing the graphic above via social media. Stay tuned for more information.

Griffith J here, will this one have lyrics about overcoming the hardships of having 27 thousand dollar guarantees?

^ Yea they should be playing for free and letting the promoters take all the money to buy more coke with. Let Hatebreed have the coke.

everyone in the military is stoked

my name's too dope and i wear tight wranglers

Where my Jastafarian brothers at?

What is Hatebreed's guarantee range and what do you think they net before taxes per show? Explain their per show costs.

Chauncey CC is loving this.

You think Jasta still has beef with that dude from Guyana Punchline?

I am not a huge fan of the type of Hardcore that appeals to overdeveloped gymkata-practicing short-haired jocks in basketball tank-tops. All of this and the fact that I hate chugga-chugga metally Hardcore, that's why I never bought a HATEBREED CD.

I want to rail a bunch of ketamine to this

Latent racist fat dudes who got their GED in their mid-twenties and who unironically "throw the horns" at the one concert they attend per year are stoked.

out here in the fields, i fart for my meals

Griffith J here, will this one have lyrics about overcoming the hardships of having 27 thousand dollar guarantees? Their guarantee is $25k at the minimum. And they refuse to play shows with no barriers. It's a shame, the rest of the bands might be nice guys but Jamey is such a greedy tool that it turns ppl off.

their last tour they played scenic Wilmington, DE with Gideon as an opener. If that doesn't scream "one more for the $$" i don't know what does....

Show of hands, who cares?

25K guarantee? Please. Can they draw 1000 people anywhere? They're a solid draw, but they don't do substantial numbers any more.

no way they're getting 25k to open for DKM/Clutch

Hatebreed was good in '96. Now they're a poor man's Marauder.

Four years between the same album.

Celine is not stoked

They played to a 2/3 empty theater here in 2015 with Dying Fetus and some bullshit tech metal band.

Kids with Asking Alexandria hoodies in their closets are stoked.

They. Will. They Will Be Heard.

I absolutely LOVE Hatebreed yet some of these insults have me ROLLING.

conceived! through an act of violence. that's not something to spout off about there, Jamie

What ever happened to Hatebeak?

they played a sold out 1500 room here last year by themselves So you live in Europe or 2005?

^ got beat up by said ppl "push moshing"

Sarah from Maryland with the pig face!!

Got beat up by said ppl "push moshing"? None of those shit heads fight at shows, they rage out for 2 seconds with someone else if there is a problem or confrontation then they laugh, hug, and blow each other after the show. All they know is aggressive duck duck goose

If Jamey was smart he'd play the biggest clubs in homestate Connecticut, upstate New York, Boston, New York, Philadelphia, and Washington DC once a year with a solid show within a show undercard like that PlayStation Theater show. Those six shows alone would probably pay his mortgage for the year.

^^^ Investments? Like what? It's easy to have tons of money when you spend money like it's 1998. I don't think I've ever seen him wear a shirt other than a t-shirt haha. He definitely gets his hair cut for no more than $20 including tip.

Dude who said jasta should do a big show with a solid lineup for like 6 dates in the NE described stillborn fests. I went to one in dc and one in pitts in dec 2003 (or 4?) Hatebreed, soia, agnostic front, stretch arm strong, madball, sworn enemy, and a bunch more. They played for like 2 1/2 hrs in dc and didnt know anymore covers or songs.

Hatebreed are shills for big camo.