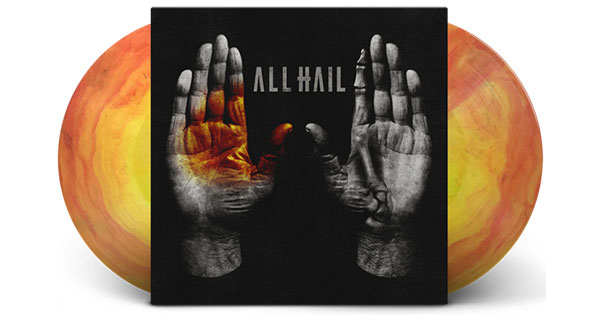 As you may recall, Norma Jean entered the studio earlier this year with producer Will Putney to begin recording their eighth studio album. The band have now revealed that the fruits of their labor is titled All Hail and will hit streets on October 25 through Solid State Records. Further details have yet to be divulged. Its cover artwork can be viewed above, while a teaser video exists below.

It'd be cool if at least one guy from the original line-up was still in this band. Re-name. Take the hit.

At least this band that calls themselves Norma Jean still plays shit off Bless the Martyr. There are a bunch of random dudes calling themselves Zao but they ignore Splinter Shards and All Else Failed. Just change your fu ckin name.

I like the one song that goes chugga chugga bree bree

Do you think they will cover an Eso-Charis song on their next tour?

Are they still a Christian band or are they "Christians in a band?" that will determine their true heaviness

memphis will be laid to waste is better than anything in zao or disembodied discography. for further reference.... shadows are security is in my top 5 metalcore all time albums

I always thought Mary Anne was hotter than Ginger.

hang it up, no one has cared since redeemer

wait norma jean are nazis? what's up the the seig heil coverart?

Kids that I went to youth group are now letting their kids listen to this. "Bag in my day I wore a white belt to shows and Jesus protected us when we moshed."

anonymous1 minute ago wait norma jean are nazis? what's up the the seig heil coverart? NO DUDE, those are Jesus' hands. Or someone Heiling Jesus. Jeez!

I hope they play for the Pope. He would like them.

Tim Lambesis here, keep your wives away from me Norma Jean. I have a killer smile.

Solid State is a still a label?

"At least this band that calls themselves Norma Jean still plays shit off Bless the Martyr. There are a bunch of random dudes calling themselves Zao but they ignore Splinter Shards and All Else Failed. Just change your fu ckin name." Those "random" dudes completely re-recorded and released All Else Failed.

Brandon Ebel is putting his grandkids in college now.

Hey everyone, I am the hot chick from Immortal Bird, buy our record, it is on splattered vinyl.

"hang it up, no one has cared since redeemer" ^ yes

the new Tomb Mold record is so damn good.

Hey everyone, I am the hot chick from Immortal Bird, the new Tomb Mold record is so damn good, it is on splattered vinyl.

christians and their god damn xmas

I hope this has plenty of dissonant breakdowns!

the band went downhill after redeemer, meridional wasnt terrible though. But they need to get some of the previous members back. Its basically Cory's band now and a revolving door of touring members/fill ins/temporary band members.

They're going to re-release this with the songs from that Lutikris album.

Looking forward to picking this up at Walmart clearance bin in November.

wont be as good as knocked loose not even close

This band was never good. I do give them props on being able to be around playing this boring, uninspired and redundant style of music for as long as they have.

This band went downhill the moment they got together to "jam" for the first time.

anonymous17 hours ago remember Training for Utopia, those guys ruled. when it came to Christarded bands, they were underrated.

"Those "random" dudes completely re-recorded and released All Else Failed." Yeah, and they didn't want to. It was thing they did to finally get out of their shitty Solid State contract. Also, when this redo happened, Jesse Smith was still in the band. And they haven't played any of those songs live since like 1998. I asked them on Facebook about it once a few years ago and they flat out said they never would. Change. Your. Name.

Whoever said no one cares since Redeemer is completely misguided. Plus this is far from uninspired music. I give very little credibility to your opinion on just about anything.

^ No, the person who said that about Redeemer is actually correct.

the south will rise again, bring back southern rock flavored hardcore , loved all those bands what a sick era

^ been done. Got boring real quick. That's why ETID shows are thinning out

Headlining soon at a vfw/dive bar near you!

Hopefully this means HUNDRED SUNS gets another chance soon.