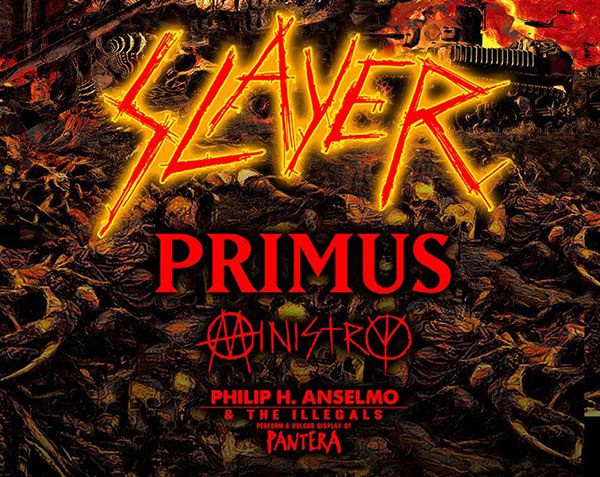 About two years ago there was also a band called Slayer. They did their final tour for a while. This must be a new Slayer that is having a final tour.

Billings should be the final date. almost got it right this time

I don't care what you people say, Rachel Ray is still hot.

Les Claypool's voice sounds silly now. I used to think it was cool but it is silly.

Glad to see they chose to have the final band to open for them be a bunch of goofball hippies playing 7 string basses and splash cymbals. Totally metal

The Final Conclusive End of Career Last Finale Until The Reunion with Jeff Hanneman Hologram Tour in 2025.

Will go for Primus and then leave

^^^^^ lol, white power and the bald retards are going to open

Primus is the only reason to attend this shit show.

Slayer at TaxSlayer arena. LOL. Moline are you fcking kidding

Slayer opened for Pantera on their final US tour, now Slayer is having Phil open playing Pantera for Slayer's final US tour? Well played Slayer! People are going to loose their shit when Phil plays anthing Pantera to warm up the audience.

^ Not if you saw the live stream the other day. Phil's voice is gone, and his new band is sloppy. They butchered an entire set of Pantera songs.

Going mainly to hear the Pantera material, Ministry and Primus will be cool, and might watch a bit of Slayer before going home. I don't wanna hear how many times Tom Araya mentions Slayer/TaxSlayer on this show, so I have to leave early.

Hey Phill, im going to be at MSG in the seats. Can you raise your left arm in the air and recite the pledge of Allegiance for me.

anonymous 1 hour ago Slayer at TaxSlayer arena. LOL. Moline are you fcking kidding That had to be the reason they put it there and not one of the million places they could have had it in Chicago

"People are going to loose their shit when Phil plays anthing Pantera to warm up the audience." A- you sound like you're on the street team B- it's an entire set of Pantera. no one wants to hear his Illegals shit

ICE is stoked to wait in the parking lot at these shows.

Will go for Primus and then leave. -Is Primus a Christian band

This tour is fcking gay.

Where Is everyone crying that vein, turnstile, code orange, and year of the knife should be on this? Well, where are you gays?

^ Where are any of these shit bands on this tour? Guess their booking agents don't have enough money to buy them onto it.

Only would go if Five Finger Death Punk and DragonForce plays. Fight me@ MSG

Where Is everyone crying that vein, turnstile, code orange, and year of the knife should be on this? Well, where are you gays? I'm sure some loser hc kid from the burbs will say it, not to worry

Where Is everyone crying that vein, turnstile, code orange, and year of the knife should be on this ^this would be a bombastic tour lineup tbh (rearranged for popularity of course)

Code Orange, Knocked Loose, Turnstile and Vein should be on this

They play on Friday November 15th in Sioux Falls, SD not the 16th

Code Orange, Knocked Loose, Turnstile and Vein should be on this ^they should. What's your point? No one cares of these Huntington Park ghetto has-beens

Madi from Year of the Knife should be on this

Your mom should be on this

Slayer, Primus, Ministry and Philip Anselmo. I'm in. Going to be the last time ever to hear Pantera and Slayer performed in an arena in the same evening by original members.

^ No one cares. Bitch

"This tour rules Fight me at the Oakland show ill be wearing a chain wallet and and a slayer shirt" That really narrows it down. Can I assume you'll also have an impressive front-butt that hangs over the front of your cargo shorts?

Only going to hear the south park theme song live

Everyone leave after Primus. Slayer and Ministry are complete shit.

I saw Slayer and Pantera at the new Haven coliseum which no longer exists. 12 year old me was based af.

Did anyone see the price for for a ticket? Jesus does not save that much money. Money grab!! Sorry, I'm out!!