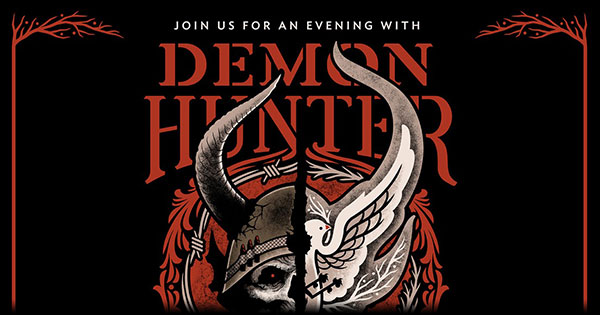 Official press release: Demon Hunter will perform more than 20 songs each night at a series of special shows this summer. 'An Evening With' Demon Hunter is an epic mixture of fan favorite anthems and deep cuts that have never been performed live. Both electric and acoustic presentations will feature songs that span the band's ten studio albums, including their most recent, War and Peace, which were released simultaneously earlier this year. "We're building a show that's unlike anything we've done before," vocalist/co-founder Ryan Clark explained. "We'll have video installations, created specifically for this tour, during set changes. We are planning the biggest lighting/staging production we've ever done, surpassing even the Stronger Than Hell tour we did back in the day." 8/7 Seattle, WA @ Neumos 8/8 Portland, OR @ Hawthorne Theatre 8/9 Sacramento, CA @ Ace of Spades 8/10 Pomona, CA @ Glass House 8/11 San Diego, CA @ House of Blues 9/24 Birmingham, AL @ Iron City 9/25 Houston, TX @ Warehouse Live 9/26 Dallas, TX @ Trees 9/27 Tulsa, OK @ The Vanguard 9/28 Sauget, IL @ Pop's 9/29 Louisville, KY @ Louder Than Life (festival date)

an evening with? literally no one was asking for this

youth pastors, whose wives secretly hate them, are stoked!

No brotherhood, no loyalty, fck you , you cucked me. SOSF!!

ehh some of the older stuff is ok...but not really into the idea of 2 hours of them with no other bands playing...can't imagine more than a handful of people showing up for this...

youth pastors, whose wives secretly hate them, are stoked! ^lol

in 2006 I toured with these losers and " a plea for purging" and it was old news then. Prayer sessions on the stage after the show were fun watching at some random ass youth christian center.

Diablo, Baal, and Mephisto are not stoked.

Disembodied is not stoked.

Good news for the wives of this bands fan base: while their creepy, craft beer loving, flannel wearing youth pastor fan base is attending these shows their wives have a chance to stay at home and fck a REAL man behind their backs!

Nice posts everyone, such a positive, kind, thoughtful bunch.

This band is better then Zao.

Tim Lambesis checkin' in here. I just want to let you know that I've hunted my demons and beat them. And this fall my band will release a new album which I hope that you listen to and come see us on tour. God bless.

^demons are fake, Tim. You dipshit. You fcking loser.

Even the vocal part that Ryan Clark did on Skin Like Winter off the ZAO/TFU split was better than anything Demon Hunter has ever done.

I herd from an anonymous source that 8/12 will take place@The Mandalay Bay Hotel w/ As I Lay Dying, Bleeding Thorough, and Everytime I Die. Second stage is Kill Your Idols, A Plea For Purging, For Today, and Knocked Lose.(out door festival)