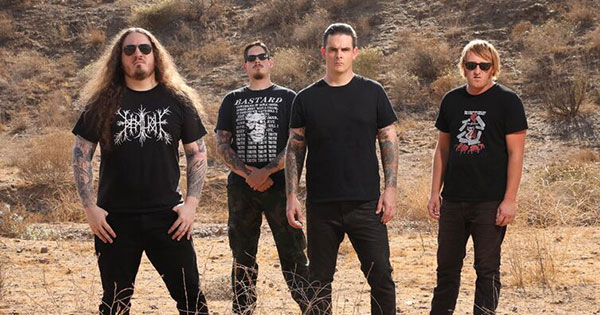 photo by Chrissie Good
Nails have officially released a new single titled I Don't Want To Know You via Nuclear Blast Records. The title track is accompanied by a B-side which features a guest turn from metal legend Max Cavalera (you can stream the song below). In addition to today's digital release, the record will be available on limited edition 7" vinyl on June 7. "I Don't Want To Know You" was tracked by Nails drummer Taylor Young, mixed by Kurt Ballou at GodCity, and is the band's first recording to feature their second guitarist Leon del Muerte. Nails have also unveiled a music video for the new single that was directed by Nico Poalillo (Ghost, Chelsea Wolfe). You can watch that here: Meanwhile, Nails have also announced plans to tour headline a ten-show North American tour featuring support from Misery Index, Devourment, and Outer Heaven. Those dates are as follows: 6/7 St. Louis, MO @ The Firebird (no Misery Index) 6/8 Chicago, IL @ Metro 6/9 Detroit, MI @ The Shelter 6/10 Toronto, ON @ Opera House 6/11 Montreal, QC @ Club Soda 6/12 Boston, MA @ Middle East 6/13 Brooklyn, NY @ Music Hall of Williamsburg 6/14 Philadelphia, PA @ Union Transfer 6/15 Baltimore, MD @ Baltimore Soundstage 6/16 Raleigh, NC @ Lincoln Theater 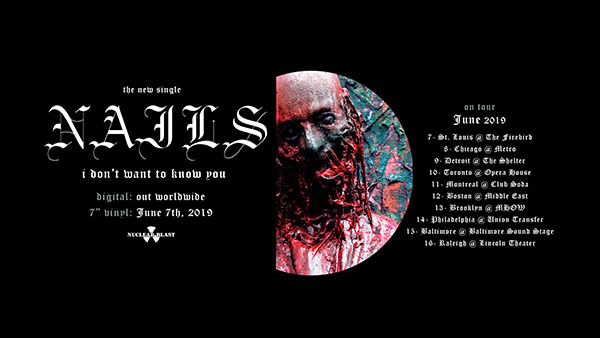 One time Todd Jones caught me sneak into Sound & Fury. I jetted and his goonies never found me.

Todd Jones hasn't listened to the new Pissgrave album yet because as he put it, "that shit is softer than mashed potatoes." He also has no penis.

Max Cavalera is a waste of space.

complete utter mongoloid fanbase for this band. Kids who love Full of Hell and Code Orange are stoked

i hope the fat bass player keeps his shirt on for this tour. Bro you aint looking tough with that pot belly and man t-ts hanging out

Todd Jones is the absolute king of hardcore. What he says goes in the scene. There should be a a class for hardcore beginner's taught by Dr. Jones himself.

You pose hard if you never saw Impaled live.

i hope the fat bass player keeps his shirt on for this tour. Bro you aint looking tough with that pot belly and man t-ts hanging out ^^^^^ Captain Cool over here.

fcking give up. you dudes are not grind, metal, punk, hardcore, or whatever. You are coat-tailing scenesters with zero musical ability.

i hope the fat bass player keeps his shirt on for this tour. Bro you aint looking tough with that pot belly and man t-ts hanging out ^^^^^ Captain Cool over here. ^^^^ BUT BROOOOO. Captain micro peni more like it

Todd "This nihilistic tough guy persona is hard to keep up when you're a derpy dad with kids" Jones here and you will never be one of us.

Is this the only website reporting on this since Todd hates every other metalsite because he's too cool?

This sounds exactly like all the other shit that they've ever come out with and may I emphasize the word shit because this band is a fcking joke. one minute long are you fcking kidding me?

Tell that retard to take the Demilich shirt off.

truthstar3 hours ago One time Todd Jones caught me sneak into Sound & Fury. I jetted and his goonies never found me. Lemme guess, and then you had to lift your ball sack so they could check your ass hole, you collected your delicious prized hamburgers from Donkeylips, and shared a much needed clove after the show.

hmmm, this reminds me of the time that Olmec was counting me down and a temple guard grabbed me. i didn't have a pendant, so game over. i will never be one of them

The song is almost too technical to follow. I'm in awe of this musical talent.

AMEN to the donkeylips hang and sharing a much needed clove, I think we all needed that.

everyone posted above is of woman born. AKA they came out a pssy

the art is worse than the music. by far.

Once Saba left this band went to complete shit.

Ya, whatever. That's some hard shit, all of it. Haters beware, gays need not apply.

you will never be one of us im not a robot

I remember when Todd Jones was a pencil thin twink wearing crucial HC tees and updating his vinyl collection online. Now he wears grind/metal shirts and does a "power stance" while he plays and poses like he's been in this shit forever. Bro, you were a youth crew kid like... 10-12 years ago. It's okay, just accept it and don't try so hard.

The pot belly bassist is the toughest looking one of them all kid.

Todd Jones can get it

Alex Jones Prison Planet should be on this. Nice how Nails considers themselves a deathmetal band. Noone in deathmetal likes 1 min songs.

I guess the new guitar player became one of them

The post about T Jones and his history of posi-core, youth crew shit is spot on. It's as if Taylor Swift decides she's going to be a punk and play solely 77 punk. The two couldn't be more disparate. fcking give up. Nails has always been an LA scene band with an undeserved astronomical guarantee. Please stop booking this dogshit.

I back all of the hate coming towards this band on this thread!!!! The drummer and his brother are pieces of shit and Todd is a hypocritical, egotistical dck hole that needs a wake up call in life. You all fcking suck and your bands aren't nearly as cool as you would hope.

I will pay them to play my big summer fest. But only if they fly-in and do a Buddy Holly, Patsy Cline, or Lynyrd Skynyrd. Get it? How about John Denver or Richie Valens?

Comments about his youth crew past and being a fake, being a family man with kids yet acting all nihilistic and how the 2nd guitar player is now one of them are both hilarious and spot on.

Does Hardcore metal bands that don't sell out 1k venue places even pay the bills now - a days? I don't think child support is getting paid this year.

Todd Jones makes more money than all of you lol

Yup giving hjs behind the seven eleven really pays these days. I want my minute twenty back. This song is not good

How many shows do Nails cancel because Todd Jones doesn't think the soundsystem is good enough? Did Scott Vogel drop to his knees beg Todd to give Terror the direct support slot?

When will Todd cash in with a Carry On reunion?

Todd Jones makes more money than all of you lol >> Nah nutrider.

Todd,It is very bad to talk about yourself in the third person."Todd Jones makes more money than all of you lol"remember when you were a roadie for "Terror?" you didnt make shit for that, except for bruised knees & a neck brace,there was even supposed to be a Lip gloss fashioned after your name "Jones Bones."