War and Peace, the pair of new albums released simultaneously by Demon Hunter this month, have both debuted in the Top 75 on the Billboard 200 chart. Specifically, the band's War record sold roughly 12,000 copies in its first week of release in the United States, landing at No. 55 on the Billboard 200. Meanwhile, Peace, bowed at No. 61 on same the chart with sales tallying 11,500. You can view the albums' debuts on select Billboard charts via the graphic below. Interestingly, if the recordings had instead been sold as a double album, official sales would have topped 23,000 and made the release Demon Hunter's top-selling and highest-charting album debut to date (the album would likely have debuted in the Top 5). Demon Hunter's previous album, Outlive (2017), sold almost 19,000 in its debut week, peaking at No. 25 on the Billboard 200. Its predecessor, 2014's Extremist had nearly identical sales numbers and debuted at No. 16 on the Billboard 200. 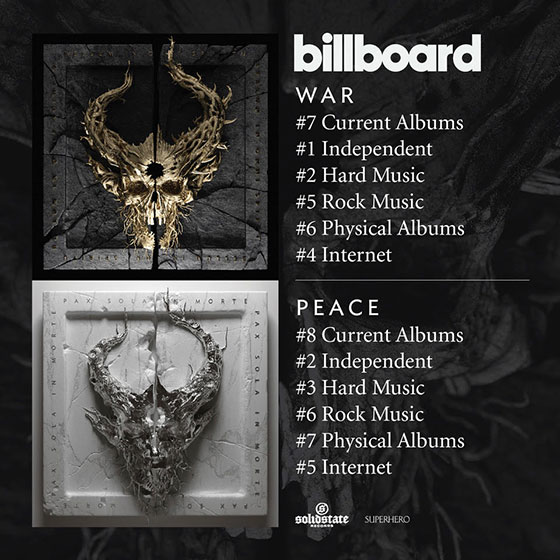 i listened to this band once. never again

.... because no one buys records anymore

This is the reward for promoting non toxic masculinity

that math makes no sense whatsoever, the same people bought both albums, if it was released as one album the sales would total 'War' or 'Peace'

This actually blows my mind. Those are some decent numbers

anonymous8 minutes ago that math makes no sense whatsoever, the same people bought both albums, if it was released as one album the sales would total 'War' or 'Peace' Incorrect, sir. When a double album is sold, it counts as two sales.

Webby is correct that being said the point is still valid. The same fan base consisting of roughly 11,000 people give or is accurate. No idea how this band supports itself in the current climate.

you make way more money separating them, who cares about the chart position in 2019. Do the math

Absolute best part of being a woman...I can choose to wear my swimsuit (1 or 2 piece), I can dance in ballet slippers and my skirt, cook for myself and last but not least...I can be little spoon and lay my head on my mans chest falling asleep to his heart beat. <3 Oh not to mention when I pick out my outfits to wear they're extremely cute =]

Ive heard about this band since like 2003. Never listened to them though. Should I?

"I wore my Demon Hunter patch on every mission. I wore it when I blasted bin Laden" - some navy guy

literally had no idea they were that popular. Jesus sells!!!!!

This thread is full of choads. Band is actually decent, regardless of what they sing about. Misery apparently is the bigger draw for post korn kids.