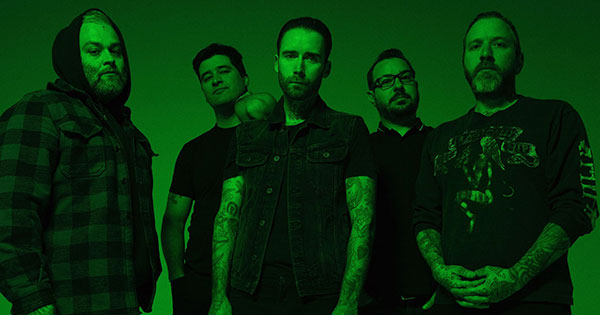 Ontario, Canada post-hardcore outfit Alexisonfire have released a new track titled "Familiar Drugs," the band's first new music in nearly a decade. You can stream the song here: Vocalist George Pettit had the following to say via a new interview with Loudwire regarding the current status of the band and the possibility of more new material:
"Honestly, we're working, but I'd say we're more of a light duty band so far. We all have our own lives outside of the band that require a certain amount of attention, right? So it's been really difficult to align schedules to get any sort of meaningful amount of time in the rehearsal space. It's just a day here, a day there. Now, mind you, when we get into the rehearsal space those are very productive times. "We're writing a lot. But as far as what's next, I can tell you right now, I don't think this will be the last release of Alexisonfire. But, I don't know what the next release is going to be—if it's going to be a single or it's going to be an EP or an album. "I think we all like the idea of making an album, but it would require a month of us rehearsing straight and then probably a month in the studio then two month—it's just an enormous amount of time for us right now. As of right now, this is what's happening: We've got a new single coming out with the possibility of more to come."
Meanwhile, Alexisonfire has also announced a few headlining shows set to take place in North America and the UK. Those dates are as follows: 6/1 London, UK @ Alexandra Palace 6/8 New York, NY @ Terminal 5 6/13 Los Angeles, CA @ The Wiltern 6/15 Toronto, ON @ The Budweiser Stage