Baltimore, MD death metal outfit Misery Index has revealed that their new album is titled Rituals of Power and will hit streets on March 8 through Season of Mist. The album was recorded earlier this year with producer and engineer Erik Rutan (Morbid Angel, Cannibal Corpse) and subsequently mixed by Will Putney (Pig Destroyer, Counterparts). You can check out its cover artwork (by Raphael Gabrio) and track listing below. In conjunction with the announcement comes the album's first single, "New Salem." A video for the track, directed by Paul McGuire, is available here: Rituals Of Power will be released in jewel case CD, limited LP, limited cassette, and a limited deluxe digibox which includes bonus cover tracks -- Nailbomb's "Wasting Away" and M.O.D. - Method of Destruction's "Man Of Your Dreams" feat. Rob Barrett Iii of Cannibal Corpse -- as well as a carabiner with key strap and bottle opener, a patch, and three vinyl stickers, and digital copy. 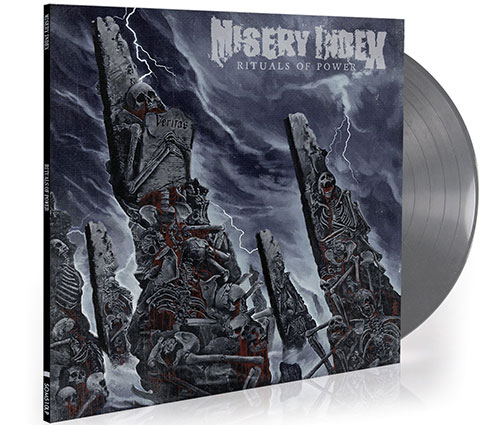